The 2D and 3D survey was taking place in the Western Cape, with plans to move from the Namibian border, past Cape Town and as far as Cape Agulhas. 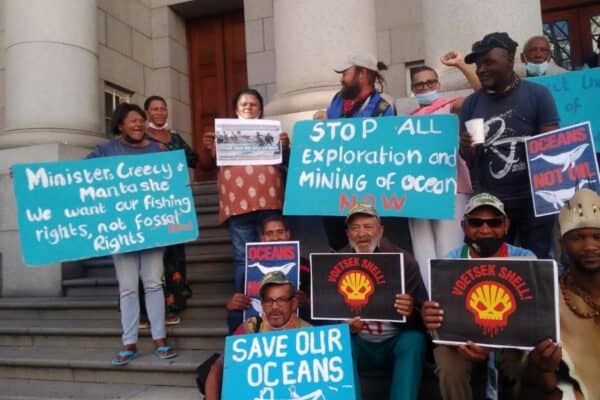 Protesters outside the Western Cape High Court during the urgent interdict to halt another seismic survey. Photo: Twitter/@wilmienwicomb

Another stunning victory for the environment and local fishing communities saw a seismic survey taking place along the West Coast halted, after a successful urgent interdict was instituted.

The 2D and 3D survey was taking place in the Western Cape, with plans to move from the Namibian border, past Cape Town and as far as Cape Agulhas, covering an area of 22,000km and 10,000km² respectively.

This is the third urgent interdict relating to seismic surveys along South Africa’s coastlines brought on by big petroleum companies, after a successful second interdict instituted by local communities in the Wild Coast region in December last year.

News broke of the latest survey after a petition was shared by Vuma Earth last month.

The survey was given the go-ahead by the Petroleum Agency of South Africa, which granted Searcher Seismic a reconnaissance permit on 9 November 2021.

The survey began on 15 January, despite protests and letters of demand being sent.

Communities, activists and lawyers cried foul over the survey, saying the company had failed to apply for environmental authorisation, and neglected to consult with interested and affected parties.

But the Department of Mineral Resources and Energy’s media relations and content manager Ernest Mulibana told The Citizen all boxes were ticked, and that a draft environment management programme was published for a 30-day review and comment from 10 August to 9 September last year.

According to Rhodes University Environmental Monitoring Group researcher and Coastal Justice Network’s Taryn Pereira, the survey could have potentially left “tens of thousands” of local fishing community members vulnerable to the effects of the survey.

Pereira said 30 fishing communities relying on the ocean for food and economic security, as well as heritage and identity, would have been potentially affected.

The Green Connection strategic lead Liziwe McDaid said the survey could disrupt the behaviour of snoek, which is endemic to the region, and brings in a significant amount of income for fishermen.

The survey could also impact multiple endangered marine species, such as the Southern Right Whale and the African Penguin, We Are South Africans founder Gilbert Martin explained to The Citizen.