‘Assault over salt’: Limpopo man to apply for bail after beating, kicking teen

Corrie Pretorius faces charges of assault with intent to cause grievous bodily harm and pointing of a firearm. 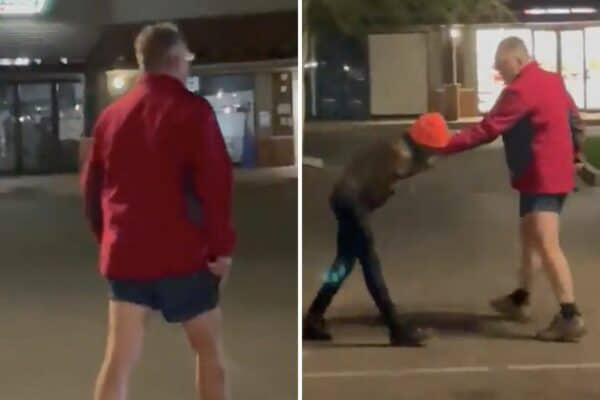 Corrie Pretorius allegedly assaulted a 16-year-old boy while pointing a firearm at him outside a food outlet at Groblersdal Game Center on 15 June 2022. Picture: Screenshot

A Limpopo man accused of severely assaulting a 16-year-old boy in Groblersdal is expected to apply for bail on Friday.

Corrie Pretorius, 52, is set to appear in the Groblersdal Magistrate’s Court following his arrest last week on charges of assault with intent to cause grievous bodily harm and pointing of a firearm.

Pretorius assaulted the minor during an argument, allegedly over seasoning salt, at Groblersdal Game Shopping Centre on 15 June.

ALSO READ: 50-year-old man nabbed for kicking and stomping on teen in Groblersdal

During his first court appearance last Friday, Pretorius’ bail hearing was postponed for a week and he was remanded in custody.

The National Prosecuting Authority’s (NPA) regional spokesperson, Mashudu Malabi-Dzhangi, said the teenage boy and his cousin were at a Fatcake City shop when he asked to use the same seasoning as Pretorius.

Pretorius allegedly became furious and started assaulting the minor by pushing him outside the store. The incident was captured on video and went viral on social media.

“He continued assaulting the boy while pointing him with a firearm, until the accused eventually left the complainant lying on the ground.

“A video of the incident was captured and posted on social media. The complainant was later taken to Groblersdal Hospital, where he got medical attention and later discharged,” Malabi-Dzhangi said.

According to Limpopo police, other shoppers watched helplessly as Pretorius assaulted the boy.

WATCH: Salt said to have sparked assault of black teen by white man