The security guard is currently in a critical condition, and the suspects escaped. DEMS responded to the scene of a cash-in-transit heist on the N3 south highway in Germiston.

A security guard was left in a critical condition after being shot twice in the head following a cash-in-transit (CIT) heist on the N3 south highway, between Spruitview and Leondale, on Thursday morning.

Ekurhuleni Disaster and Emergency Management Services (DEMS) was on scene, along with ER24 paramedics and another private ambulance service, reports Germiston City News. 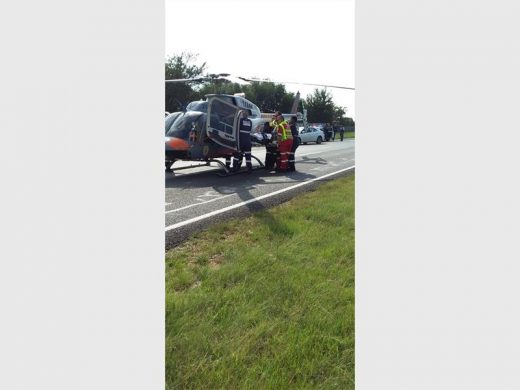 A security guard had to be airlifted to hospital following a cash-in-transit heist on the N3 south highway, between Spruitview and Leondale, on Thursday. Photo: ER24

Russel Meiring from the ER24 communications office said they arrived on scene at 8.10am to find the CIT vehicle on the side of the road.

The male security guard was found lying a few metres away.

“Medics assessed the man and found he had sustained a gunshot wound to his head, leaving him in a critical condition,” said Meiring.

“The man was treated for his injuries and was provided with advanced life-support interventions before he was airlifted by a private medical helicopter to hospital.”

The N3 south and north highways had to be temporarily closed for the duration of the operations.

Ntladi added that the suspects escaped and the scene had been handed over to the SAPS for further investigation.