The five suspects were declared dead at the scene after a shootout with the police. The five suspects believed to be behind robberies and hijackings in the Pinetown, Umbilo, and Berea were shot dead by police in Bellair, Tuesday, 11 August afternoon.

The suspects, believed to be in their 30s, were linked to a case of carjacking reported in Pinetown, where a motorist was robbed of his vehicle yesterday morning.

KwaZulu-Natal (KZN) police spokesperson, Colonel Thembeka Mbele said Durban K9 Unit members were following up on information about a stolen vehicle that was used in a number of cases in Durban.

According to Mbele, the said vehicle which was used to commit carjackings and robberies was then spotted on the M7 highway towards the Bellair area.

“A chase then ensued between the suspects and the police towards the Malvern area. The suspects’ vehicle crashed into a concrete light pole and brick wall and overturned on Woodlands Avenue in Bellair while the suspects fired shots at the police,” said Mbele.

According to Mbele, the five suspects were declared dead at the scene following a shootout with the police.

Mbele said three unlicensed firearms with six rounds of ammunition were seized from the deceased suspects.

“The suspects were positively linked to a business robbery case that was committed yesterday in Umbilo where a vehicle and other belongings were taken from the business premises.”

She added that preliminary investigation gathered at the scene also revealed that the vehicle was taken during a house robbery in Newlands East in June 2020.

KZN Provincial Commissioner Lieutenant General Khombinkosi Jula said it was quite disturbing to see police officers being attacked while executing their duties.

“The police officers will defend themselves when they come under attack. I am glad that no injuries were sustained by the team,” said Jula.

In a separate incident, two of the armed suspects were shot dead and one was critically wounded after they allegedly broke into the property at Grace Avenue in Westville and confronted the homeowner, said KwaZulu-Natal police spokesperson, Captain Nqobile Gwala.

The incident took place at around 5.30am on Wednesday.

Red Line Response’s spokesperson Garrith Jamieson confirmed two suspects had been declared dead at the scene while a third had been critically wounded.

Jamieson said the suspect had been transported to a hospital under police guard after paramedics stabilised him at the scene.

According to Mathios, a fourth suspect managed to evade arrest.

“Charges of robbery, attempted murder and an inquest have been opened at the Westville Police station for investigation,” said Gwala. 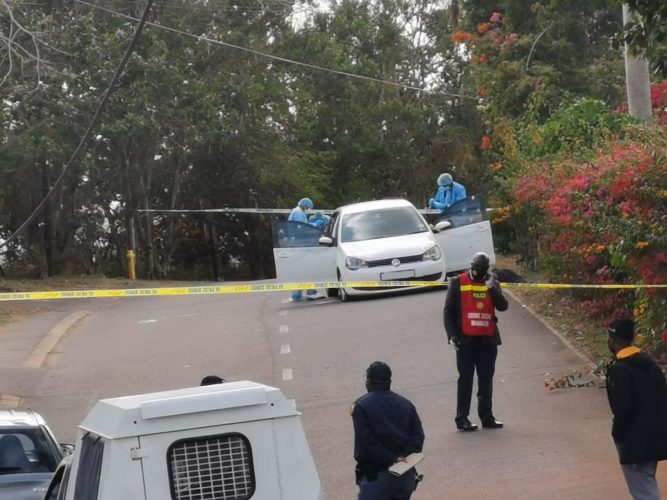