A protester's insistence that 'I pay your salary,' didn't stop cops from putting him in a chokehold before bundling him into a van. 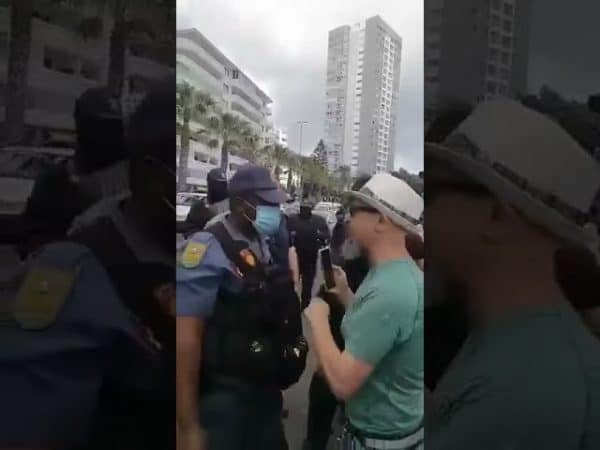 Dozens of people had gathered on the Sea Point Promenade in Cape Town on Saturday to voice their discontent over mandatory vaccines and vaccine passports.

While the government has not imposed mandatory vaccines on South Africans, it is ramping up efforts to get at least 70 % of the population immunised against the deadly and highly contagious Coronavirus before an impending fourth wave.

Western Cape Premier spokesperson Cayla Murray said no one was being forced to vaccinate. “The official position of the Western Cape Government and the Provincial Cabinet is that it is your choice to get vaccinated, which we strongly encourage,” said Murray.

A Youtube video by Alternative News ZA shows riot police with shields swoop in on the gathering. Some of the marchers had refused to wear masks.

One protestor was seen without a mask, getting into a police officer’s face.

“You work for me, I don’t work for you, I don’t take orders from you,” the man told police. He said he only takes orders from common law and the Bill of Rights and that police were violating those rights.

Another woman was heard screaming that it was her right not to wear a mask.

As anti-vaxxers began to insist that police were “provoking” them, authorities began to form a ring-fence barricade of officers in shields.

As this unfolded, the man was heard insisting that “according to the law, masks were not allowed at protests.” He later told police that the protesters loved them and did not want to fight with them.

A police officer who addressed the demonstrators pleaded with marchers to adhere to Covid protocols; otherwise, they would use the water cannon.

The man who had earlier told riot police that they worked for him continued egging on police, insisting he was following the law.

Police had warned protesters over the loud hailer to continue their protest peacefully, while adhering to regulations.

“Please continue with your protest, wear your mask and keep 10 meters away from the police. You are too close. If you don’t adhere to this, offensive measures will be taken, and that includes the use of the water cannon,” said the officer.

In another video, a protester expressed surprise that police had shown up in their numbers. “Look at these oaks; they’ve got about 60 police and riot gear. They must have got cops in from Johannesburg. There’s woman and children here.”

Police have confirmed that two people were arrested but didn’t want to comment on allegations of brutality.

Murray said the government condemns police brutality. “We strongly encourage any person who feels the South African Police Service were abusive to report the matter to the IPID for investigation.”

The City doesn’t seem too concerned with anti-vaxxers saying a significant number of people want to get vaccinated, but not everyone has had an opportunity to do so yet. “That is why the priority of this government is to improve access through more pop-up and satellite sites so that no one who wants to get vaccinated is left behind,” concluded Murray.