Why are there so many small parties? Because it’s easy to get into parliament in SA

Aspiring politicians need to gain only 0.25% of the votes cast on election day to secure a seat and the perks attached to that seat. 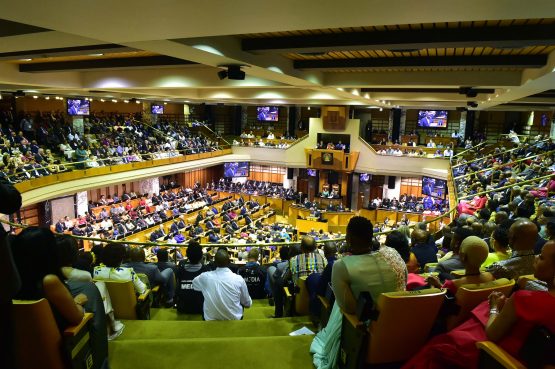 Many dream of winning R1m in the lottery. Others sit on the backbenches and earn that in a year. Picture: Elmond Jiyane/GCIS

There are two major reasons why voters will collect an extra-large ballot paper on Wednesday and need to search through 48 parties to find their preferred choice.

Firstly, a member of parliament of even the smallest party earns a salary of R91 000 per month. Secondly, it is not that difficult to get elected.

Sitting on one of the back benches in parliament is not a very demanding job either.

The mathematics is easy. South Africa has one of the largest parliaments in the world relative to the size of its population, with 400 seats up for grabs every five years.

Any politician, aspiring politician, fired civil servant or failed executive needs to gain only 0.25% of the votes cast on election day to secure a seat and the perks attached to that seat.

The operative phrase is the number of votes cast on voting day, with a low voting turnout usually benefitting smaller, more radical parties. The Electoral Commission of South Africa (IEC) announced last month that a total of 26.74 million people had registered to vote in the election, commenting that more than 15 million citizens who are of voting age and eligible to vote are not registered.

Of the registered voters, the IEC expects around 70% – equal to just more than 18.7 million people – to actually cast their votes. The voting turnout in the 2014 national election was 73%. People queue at a voting station in Umlazi during the 2016 local government elections. Picture: Rogan Ward/Reuters

Assuming 18.7 million people cast their votes, the 0.25% needed by a candidate to score a seat in parliament amounts to 46 790.

It is a daunting number, but not impossible when targeting unhappy people with radical messages and inspiring them to vote.

It gets easier when lazy citizens or more moderate voters don’t bother to vote at all.

If turnout drops to 60%, a candidate needs just over 40 000 votes to get to parliament.

If 80% of registered voters go and vote, the unknown small party with untested or unrealistic ideals will need 53 474 votes to get a seat in parliament.

Strong, emotional arguments that motivate people to go and make their mark on the ballot paper have been successful worldwide – from Europe, where right-wing political groups have made gains, to the UK’s Brexit vote that took so many by surprise. The results show that when voters are passionate enough about their views, they are passionate enough to turn out at polling stations to make a difference at the expense of their more moderate and relaxed adversaries.

And once elected, radical parties might have a bigger influence on political recourse than their supporter numbers might suggest.

At provincial, district and municipal level the smaller parties end up with even more power as they can demand critical positions or enforce their views on important decisions if the specific authority needs their support in a coalition or when issues are tabled.

Of the 29 political parties that contested the 2014 national election, 13 won enough support to get seats in parliament. The smallest, the African People’s Convention and the Pan Africanist Congress, got a single seat each.

The salaries and perks are akin to winning a (small) lottery. A member of parliament earns a basic salary of R1.1 million per annum or R91 000 per month. That’s a cool R5.5 million over a five-year term.

The leader of a minority party will earn R1.3 million per annum while its whip R1.2 million. This is applicable to all smaller parties, even the eight small parties with only one to four seats each.

The leader of the official opposition earns R1.6 million and its whip R1.3 million. There is extra cash for chairing one of parliament’s many committees.

In addition, opportunities might arise to assist friends and family in securing jobs somewhere in the structure as well, or maybe a lucrative contract.