Mapisa-Nqakula called the deployment of the SANDF a success, but added the challenges in the Western Cape have to do with socio-economic conditions. 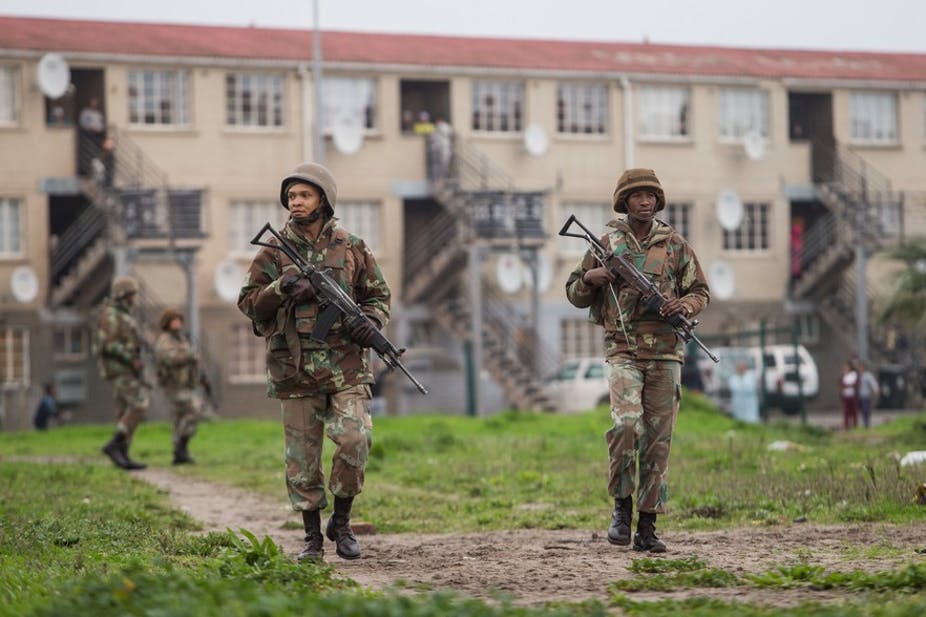 Defence and Military Veterans Minister Nosiviwe Mapisa-Nqakula has called the deployment of the South African National Defence Force (SANDF) into parts of the Cape Flats a ”success”, but cautioned that the ”temporary measure” was a moot point if the underlying socio-economic causes of gangsterism were not adequately addressed.

The minister was answering questions put to the Peace and Security Cluster by members in the National Council of Provinces on Tuesday.

DA MPL Cathlene Labuschagne had asked her whether the deployment of the SANDF to the Cape Flats was yielding any successes; if not, why not; if so, what were the relevant details.

Mapisa-Nqakula replied that ”the SANDF was never designed or aimed to be utilised internally but it should be understood that whenever state control and state authority is being undermined to such an extent that it endangers the lives of the citizens of the Republic of South Africa and destruction of property belonging to citizens it is equally mandated in terms of the law to address such as part of the whole government approach in support of other state departments and in this case, in support of the police.

”The deployment of the South African National Defence Force in the Cape Flats is a success in that where the other state entities had lost access into the areas engulfed with violence, the defence force has made it possible for them to access such areas as part of their service delivery mandate,” the minister said.

”It must be taken into consideration that stabilising a hostile environment is not an overnight and instant occurrence but the SANDF remains committed to address and perform its mandate within the given task.”

News24 reported that Police Minister Bheki Cele previously said more than 1,000 people had been arrested since the deployment of the SANDF.

Of those, 806 were already in the system and were wanted for various crimes, including murder, attempted murder, hijacking and theft.

Cele stressed at the time that the army’s deployment was a temporary solution.

In a follow-up question, Labuschagne asked the Minister if she had been in contact with her counterpart in the police and the president to ”ensure that the intervention of the Defence Force in time gets replaced with a form of effective policing”.

”We would not have deployed in the Western Cape had there not been a request made to us by the Minister (of Police),” Mapisa-Nqakula replied.

Don Pinnock, a research fellow and criminologist with the University of Cape Town, made a similar argument in an analysis first published on The Conversation.

Pinnock argued that what was needed was ”…not repression but contrition, better intelligence and the rebuilding of damaged communities whiplashed by gunfire”.

”We can step in, make these kinds of interventions, assist the police, give them as much support so they can deal with issues of gangsterism and the murders of our people here but for as long as we do not address the hunger, the poverty, the conditions under which people live in the area we will continue to have these kinds of problems,” said Mapisa-Nqakula.

The glue of the ANC coming unstuck internally, says expert
4 days ago
4 days ago
PREMIUM!

The glue of the ANC coming unstuck internally, says expert
4 days ago
4 days ago
PREMIUM!