A report has linked senior officials, the municipal manager, and firms contracted to Ugu to irregular expenditure, amounting to millions of rands, plus fraudulent conduct, financial misconduct and the payment of ghost employees. 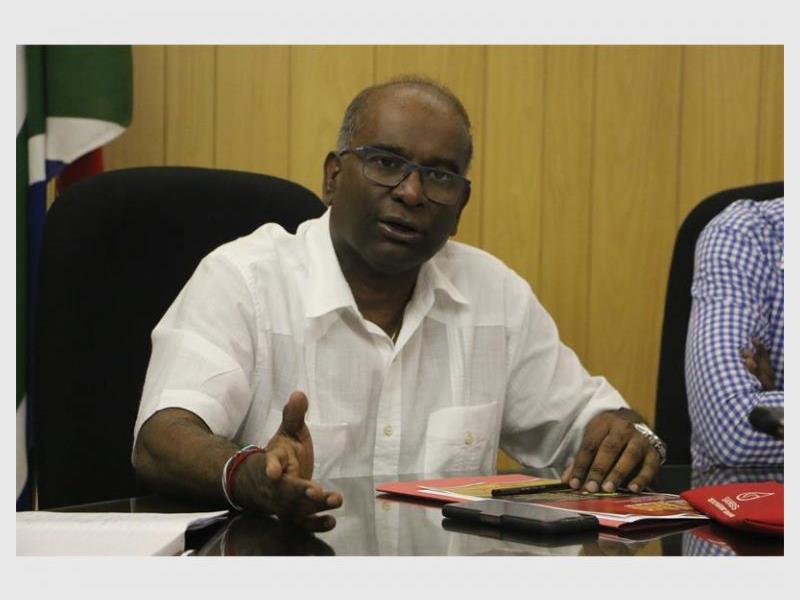 Suspended Ugu District municipal manager, DD Naidoo, has opened a case of alleged theft of municipal funds to the tune of R300 million from the Ugu District Municipality bank account.

This comes at a time when many areas on the coast are without water, due to the sabotage of Ugu infrastructure.

This was the on same day he was served with a letter advising him of his precautionary suspension, a decision made at a council meeting.

Mr Naidoo hand-delivered a copy of his own statement and the affidavit to the Herald offices on Tuesday this week.

His registering of this case comes on the back of a 236 page report commissioned by the provincial Cooperative Governance and Traditional Affairs (Cogta).

“In matters of public interest involving public funds, we must ensure accountability and, accordingly, we should await the outcome of the investigation so that those implicated, if any, may be held accountable,” he said.

He hoped law enforcement agencies would deal with this matter speedily, so that all could be appraised of the facts surrounding the very serious allegations.

The report has linked senior officials, the municipal manager, and firms contracted to Ugu to irregular expenditure, amounting to millions of rands, plus fraudulent conduct, financial misconduct and the payment of ghost employees.

The report also found, among other things, that an official siphoned R300 million from the municipality’s bank account. 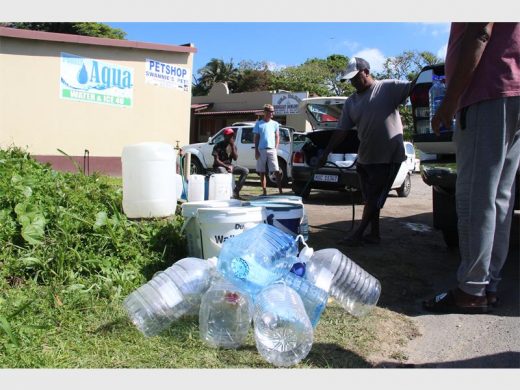 It was a Monday morning exercise to fetch water in Sea Park for Roy Moonsamy, Vusi Luthuli and Johan Bruwer.

In response to the report, Ugu issued Mr Naidoo initially with a notice of an intention to suspend, following the allegations of financial non-compliance committed by municipal officials.

Mr Naidoo was given seven days to respond to the allegations of non-compliance as cited by the investigation report.

In his statement Mr Naidoo said he considered it appropriate that, given the public interest, to make a preliminary statement in respect of his suspension and the issues around the ‘Section 106 Report’ issued by Cogta on September 30 this year.

“This matter, as reported in the Section 106 report, has attracted much negative publicity as well as public interest, especially from the diligent paying customers who have a right to be concerned, and their anger is understandable and well placed.”

He said that in due course he would address all the pertinent issues, especially those pertaining to him in his personal capacity as well as in his position as the accounting officer at Ugu.

He said it would be in fuller detail with documented evidence.

In terms of the R300 million, allegedly siphoned by an official, he said little or no progress had been made in this investigation.

“In the absence of the name of the official who is alleged to have siphoned R300 million from the bank account, a fertile environment has been created for much conjecture, rumour mongering and character assassination,” he said.

He said that in an employment relationship, there are applicable legislative protocols that create rights, both for the employer and employee.

“As an employee I shall exercise those rights in due course,” he said.

In the past few weeks, South Coast residents in certain areas have faced days, and in some cases, weeks, with no water supply.
The major concern from owners of holiday accommodation establishments is the cancellation of bookings from guests, coming hot on the heels of the losses incurred during lockdown.

One of these is a disgruntled Johan Bruwer of Sea Park, who has spent hours waiting in queues to fill empty containers.

“What about elderly people who can’t cart buckets of water? If you don’t have water how do your pets get water? I feel dirty and don’t want to live like this! We must stop paying!” he said.

Ugu spokesman, France Zama, said the municipality was dismayed by the escalating acts of vandalism and sabotage of municipal infrastructure which has resulted in many areas in the district suffering prolonged supply interruptions. In Umtamvuna, the Hanover pump station’s back-up generator room was found burnt on Tuesday this week. On the same day, a pump station in Umzinto was vandalised.

“It’s believed vandals broke the security gate to gain access as electrical panel doors were illegally opened. Technicians discovered that motor cables were stolen while all electrical components such as a generator, control box and cables were vandalized, resulting in raw sewerage spillage.”

Mr Zama said Ugu views these criminal acts, directed at its infrastructure at the expense of service delivery, as seeking to push the district into a state of anarchy.

Police spokesman Sergeant Sibu Ncane confirmed that two cases of tampering with, or destruction of, essential infrastructure had been opened at Port Edward Police Station by Ugu on Tuesday this week.

The ANC’s regional spokesman, Lindo Mzimela said it had been in talks with Ugu’s leadership as well as the Provincial Executive Committee and the Premier of KwaZulu-Natal Sihle Zikalala to discuss urgent interventions required.

The ANC is of the opinion that all of this sabotage is the work of criminals challenging the authority of the state. Mr Mzimela said that as a result of their engagements, a high level task team comprised of five MECs has been set up by Premier Zikalala to deal with this as a matter of urgency.

“As an organisation we have a very cordial relationship with worker unions, especially those affiliated to our alliance partner, Cosatu. However, the coincidence of disgruntled and expelled workers’ demands and the tampering and vandalism of infrastructure cannot be ignored,” he said.

He added that they know that the saboteurs have intimate knowledge of Ugu’s water infrastructure and this knowledge is only available to ex-employees, current employees and contractors.

“We call on law enforcement agencies to leave no stone unturned in their pursuit of these thugs. This third force that operates in the cover of darkness must not derail the commitment of Ugu to provide water to it’s communities.”

The Democratic Alliance in the Ugu region has written to the KwaZulu-Natal Provincial Commissioner, Lieutenant-General Elvis Jula, to ask for the Saps to urgently intervene, as the acts of sabotage increase.

DA’s spokesman Dr Rishigen Viranna said this was not the first time acts of sabotage had left the region without water.
He said that Ugu leadership has opened at least four cases at the Port Shepstone Saps, however, no action has been taken by Saps.

“There has been no feedback from investigating officers, no arrests or convictions,” he added.

In a letter to Lt-Gen Jula, the DA has requested urgent feedback on investigation case numbers, and requested the deployment of experienced investigators, plus experienced crime intelligence officials to work on these cases in order to make arrests and prevent further sabotage.

“The acts of sabotage have continued with impunity and have had massive negative impacts.”

He said these actions, of sabotaging pipe lines and such, allegedly by disgruntled municipal employees – dismissed due to previous illegal strike action – had left almost 150,000 residents without water, with the poor, elderly, disabled, and vulnerable the most affected.

This article was republished from Southcoast Herald with permission