'The president also promised to meet with all chapter 9 institutions, so we are still waiting with other institutions.' 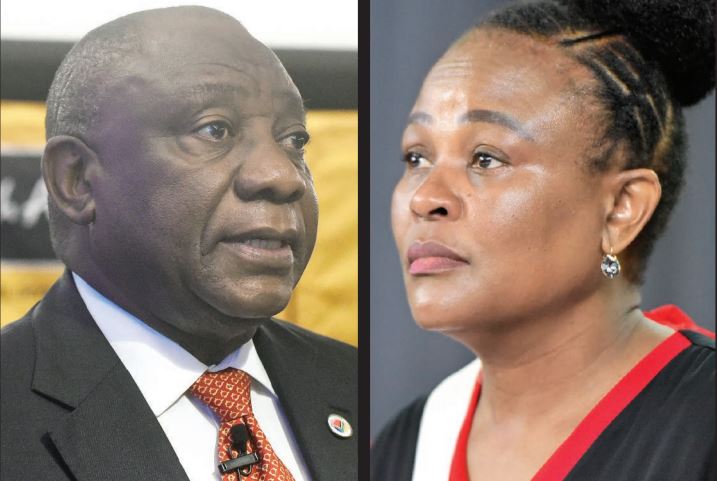 Public Protector Busisiwe Mkhwebane remained silent when asked about her relationship with President Cyril Ramaphosa when speaking to 702’s Clement Manyathela on Wednesday.

She was asked about her relationship with the president and if Ramaphosa had played a role in getting his executive members to respect the Office of the Public Protector.

Mkhwebane answered: “I don’t know. He should be asked this and what he thinks of the institution.”

Mkhwebane suggested that tensions between her and Ramaphosa continue. She said Ramaphosa hadn’t responded to her emails she sent three years ago asking for a meeting to resolve issues.

“We’ve written to the president about Minister Mbalula, Minister Cele and Mbalula has repeated his ‘hired gun’ comments… so we have opened a criminal case against him. We have not received any response to the written complaints,” said Mkhwebane.

“The president also promised to meet with all chapter 9 institutions, so we are still waiting with other institutions [to meet him].”

Mkhwebane said she is being persecuted because she has touched the nerves of those who thought they were untouchable.

“For me to be taken on review… there are 16 cases set aside from over 100 reports. If a person who does work like that is incompetent, I don’t know what to say. Eight reports have been successfully defended in court.

“So you are busy following up with the person who is there to help you. So for me to be the first one, it is because I have touched the untouchables.”

She was referring to a high court case in Pretoria in December which overturned a report by her office finding then minister of finance Pravin Gordhan had irregularly approved the early retirement of former SA Revenue Service (Sars) deputy commissioner Ivan Pillay with benefits in 2010.

Mkhwebane and the office of the public protector launched an application for leave to appeal the judgment except for orders favourable to them.

I am not a politician

Mkhwebane also disputed claims that she was interfering in the work of politics.

She said it may look likely that she was interfering but purely because her work was in a political sphere.

“I am not a politician. But it is the responsibility of everyone,” said Mkhwebane.

“The issue of poverty is politics… by saying I am not a politician, I am not, but I operate in a political space. We are supporting constitutional democracy.

“You can’t be a judge or anyone working with the Constitution without understanding what people at grassroots need. Your work needs to empower South Africans,” Mkhwebane said.