Corruption will be a threat to NHI, Mkhize admits

The health minister says he is prepared to tackle the problem by developing systems that will allow his department to act early. 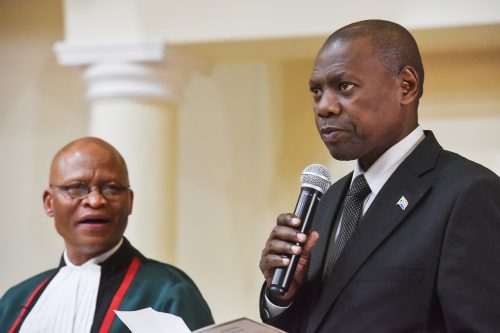 Minister of Health Zweli Mkhize during the swearing in of the new Presidential Cabinet at the Presidential Guesthouse in Pretoria, 30 May 2019. Picture: Jacques Nelles

Corruption will be a threat to National Health Insurance (NHI), but it is a situation that Health Minister Dr Zweli Mkhize has prepared for.

The NHI Bill, which seeks to make universal health care for all law, was introduced before Parliament on Thursday.

Announcing the introduction, Mkhize did not shy away from the threat of corruption that has seen the crippling of state-owned enterprises.

“I want to make a point that for NHI, corruption will be a threat and therefore we are armed to make sure that we deal with the situation. That we do not run into the problem as though we didn’t anticipate it,” Mkhize said.

“The reality is the fact that there is corruption, we need to ensure that we create systems to prevent, detect and act early, there must be consequence management where there is inefficiencies and corruption.”

The minister added the health department would not fear corruption but fight and dismantle it with the help of stakeholders who have no qualms about confronting the government about issues.

“The basis on which any system will work is an aggressive fight against corruption so people know it’s not tolerated.”

Where is the money coming from?

It is estimated that the cost of fully implementing the NHI by 2026 will cost around R256bn.

In terms of funding, the NHI Bill states the fund is entitled to money appropriated annually by Parliament in order to achieve the purpose of the act.

This money is expected to come from:

– General tax revenue, including the shifting of funds from the provincial equitable share and conditional grants into the fund,

– Surcharge on personal income tax which will be introduced through a money bill by the finance minister and earmarked for use by the fund.

Mkhize said the introduction of the bill to Parliament would begin the vigorous legislative process where the National Assembly and National Council of Provinces engaged the bill in pursuit of the mandates as set out by the Constitution.

“The process encompasses 61 steps of engagement and re-engagement, including that of public consultation.

“As a department, we look forward to the robust debate that will surely come. As far as we are concerned, all the hard questions only deepen our knowledge and understanding of the nation we intend to serve and sharpen our acumen for the policies we intend to implement.”

Meanwhile, the chairperson of the portfolio committee on health, Dr Sibongiseni Dhlomo, welcomed the bill’s tabling.

“Under the NHI, the government will provide a package of comprehensive health services for free at private and public health facilities as part of its bid to provide more equitable access to quality health care,” Dhlomo said in a statement.

He added the bill had not yet been referred to the committee, although it had been tabled in Parliament.

“We need to wait for the parliamentary processes to take place before anything can be done. I commend the minister for tabling the NHI Bill to the speaker of the National Assembly, where it will take its process to reach the committee.

“We are extremely happy about this move. This is one of the equalisers of society, where those who are poor can get access to good health care. It is a public good and addresses issues of social solidarity. We cannot wait to deliberate on the NHI Bill and have it before the committee so that those who are down-trodden can comment,” Dhlomo said.