The foreign nationals fell victim to looting in the province. Some 500 of them have been affected. Foreign nationals in need after their businesses were looted during last week’s strikes. Photos: Selogile Leshage

As South Africa celebrated Freedom Day, foreign nationals who fell victim to widespread looting in Ikageng in North West two weeks ago gathered to pray and accept donations from their counterparts.

Isaad Kure, a Somali national told Potchefstroom Herald that about 500 Somalis, Ethiopians and Bangladeshis lost their businesses when locals went on a looting spree.

According to S.H. Mohammad, a journalist and the founder of ‘We are Bangladesh in SA’, the whole North West province was affected by the looting and many of their brothers lost their businesses.

“They don’t have a place to sleep and nothing to eat. We are all trying to assist by distributing food and blankets to about 2 000 shop owners in Potchefstroom and Klerksdorp. They have also lost their asylum and passport documents.

“They are terrified that someone will kill them at night. We never got enough help from the police.

“This is bad for both South Africa and us. It is an embarrassment to the government of South Africa. South Africans have a good image internationally but they are tarnishing it by looting the tuck shops of foreign nationals while the whole world is watching,” he said. 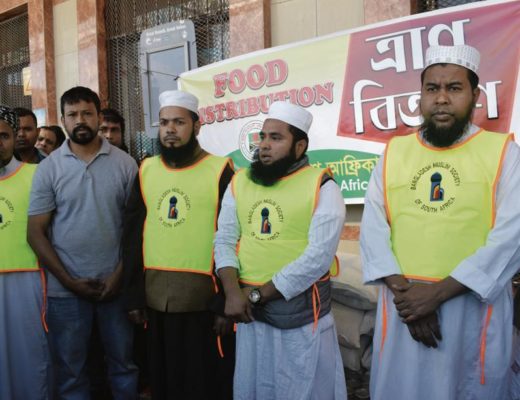 “We are small business owners, we are not terrorists or criminals. We pay our taxes. Why are they attacking us? We do not get involved in politics. The police are supposed to arrest them immediately. This is robbery, it is not a strike.”

Yussuf Mudu, a committee leader says they are waiting for the police to give the go-ahead for them to go back to their tuckshops.

“Some community members are welcoming but others treat us like soft targets. We always serve them with a smile and give them credit when they do not have money.”

Yussuf would like to march in protest against these robberies, but he knows it would be illegal. “We would rather wait for the police to grant us permission. Our belongings are gone. We are appealing to Home Affairs and Foreign Affairs to assist us.”

During the interview, another shop owner shouted: “Some of us have not even had breakfast. We have not even bathed. Our shops are our homes.”

Fellow foreign nationals from Johannesburg distributed supplies to their local brothers to get them through the cold nights.

Yussuf Mudu appeals to good samaritans who would like to donate blankets and food or any cooking utensils to contact him on 064 037 8072.