Eyewitnesses say the suspect, dressed in shabby clothes, came out of the train yard looking around suspiciously. A firefighter extinguishing the flames.

Flames and smoke could be seen wafting high into the air for the next half hour.

The small train yard holds three abandoned carriages and is closed off to the public by a wall and locked gate. This yard is located right beside the train tracks, and next to the Main Reef Road West. The suspect being arrested by local police.

The Krugersdorp News arrived with one other driver just as the flames started spreading through the first train carriage. A security officer working nearby then phoned the authorities. A police officer was the first to respond and arrived within a few minutes. Firefighters arrived ten minutes later and quickly extinguished the fire before it could reach the surrounding fields and houses. By this time, the fire had completely engulfed all three carriages.

As soon as the first responding police officer arrived, a man was apprehended and searched. The suspect, apparently in his 40s, was then detained while the officer questioned eyewitnesses. Ian Nyanga came forward as a witness and told the police and the Krugersdorp News what he had seen.

“He passed here, saw the gate was open a little and entered. We didn’t know why, but just a few minutes later he left and the fire started,” he said.

Nyanga is a roadside woodworker, working just across from the yard. According to Nyanga, the man, dressed in very shabby clothes, looked around when he came out of the yard, as if to check whether anyone had seen him. He then started running.

“We followed him and caught him at the traffic lights,” he said, adding that they then brought him to the police officer. 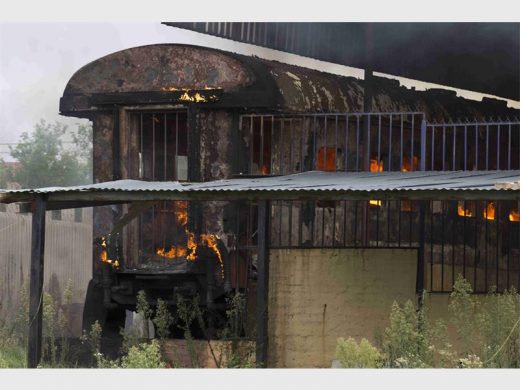 One of the carriages burnt to a crisp.

Nyanga and some of the other people present noted that the man used to work as a truck driver for a company which used to occupy that space. Witnesses believe that he might have become disgruntled when the company closed down about four months ago. This is still just speculation, as the man denied he started the fire.

The police officer questioning the man said: “You just said you were in there. You were the last one in there. When you walked out, then the place started burning.”

It is as of yet unclear whether the man had anything to do with the fire, and what his motives were if he did indeed commit this crime.