Sewage flooding into the harbour, via Lavender Creek, is due to the Mahatma Gandhi pump station being flooded 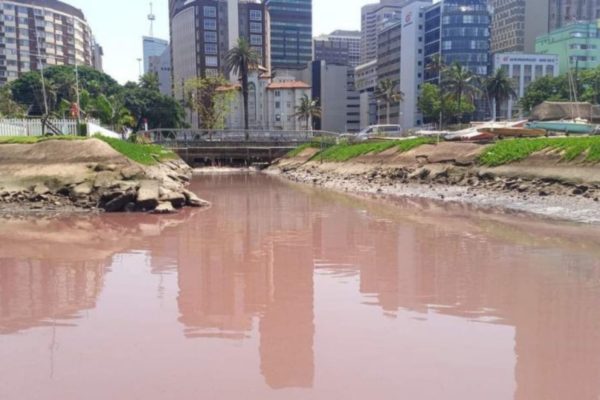 An image of the murky water, circulated on social media on 9 November. Picture: Supplied to Berea Mail

A video doing the rounds on social media has shown the extent of the raw sewage currently flowing into the Durban Harbour.

eThekwini Metropolitan Municipality said the sewage flooding into the harbour, via Lavender Creek, was due to the Mahatma Gandhi pump station being flooded, Berea Mail reported.

The reason for the pump station being flooded is due to load shedding.

“This damaged the pumping equipment resulting in this unfortunate situation. The city is dosing the spill at Lavender Creek to minimise the negative impact.”

Residents have called on people to avoid swimming at Durban beaches, but the municipality has assured that beaches are safe to use, and will stay open while the spill is attended to.

“Beaches are being monitored continuously, particularly beaches between the north and the Bay of Plenty pier. All beaches are currently safe for public use. The city will communicate in the event of any signs of danger.”

Reparations to the pump station are due to be completed by Thursday.

96% of beaches north of the Umgeni River, which had been closed for more than 80 days after a devastating chemical spill from a UPLO warehouse in the Cornubia area, were reopened at the end of October.

Berea Mail reported the beaches were reopened for recreational purposes, but not for fishing or harvesting marine resources.

KwaZulu-Natal MEC for environmental affairs Ravi Pillay said at the time that the situation would be monitored consistently.

The consumption of shellfish between the Umgeni River mouth to Salt Rock and one kilometre out to sea remains prohibited.

A plethora of hazardous chemicals that leaked out of a UPL warehouse seeped into the Ohlanga lagoon and affected residents of Umhlanga, La Lucia, Durban North and surrounding areas.

Residents’ health was affected by the spill as well as possible groundwater pollution, with many reporting difficulty breathing.

At the end of September, the same corporation which owns the warehouse and the spoiled chemicals, gave beaches the all-clear – way before it was declared safe by the city.

This after a reported emerged, which recommended beaches pose “an extremely low chemical risk to the public regardless of whether the estuary mouth is open or closed”.

To date, despite numerous requests from UPL, The Citizen has not yet seen the report.

The majority of these articles first appeared on Caxton publication Berea Mail. Read the original articles here and here.

SA not obliged to accept conditions, says Ramaphosa on COP26 green deal
6 days ago
6 days ago

Power cuts are here to stay, Ramaphosa tells Parliament
6 days ago
6 days ago

SA not obliged to accept conditions, says Ramaphosa on COP26 green deal
6 days ago
6 days ago

Power cuts are here to stay, Ramaphosa tells Parliament
6 days ago
6 days ago