Parties unite, we’re on the brink of a blackout – DA’s Mazzone

She blames the government for allowing Eskom to be sold off piece by piece to the highest bidder. 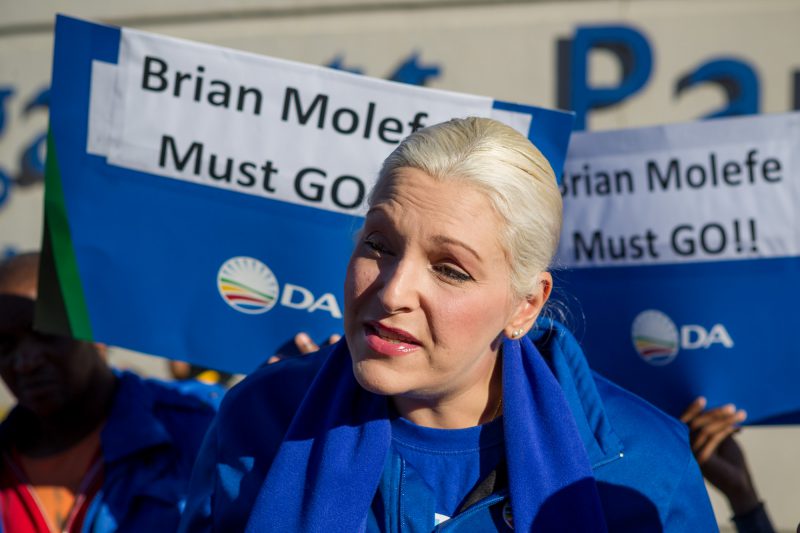 Natasha Mazzone, the Democratic Alliance Shadow Minister for Public Enterprises, speaks to the media outside Megawatt Park in Sunninghill, Johannesburg. Members of the DA, COPE and some private citizens protested the reinstatement of Brian Molefe as CEO of Eskom, who resigned under a cloud of suspicion earlier this year. 15 May 2017. Picture: Yeshiel Panchia

The deputy chairperson of the federal council of the Democratic Alliance (DA), Natasha Mazzone, said the country was in a serious power crisis and was teetering on the brink of a virtual possible blackout. Speaking in an Eskom debate on eNCA, Mazzone told host Vuyo Mvoko that the country was in a crisis that transcended beyond political lines, and needed all parties to unite against the Eskom current crises, as it was a South African crisis.

“There have been problems at the entity for at least 25 years, we’ve seen papers coming out warning us of what could happen if maintenance wasn’t executed at our power stations. We’ve seen experts coming in to give advice on how power producers should be introduced and [on] energy, and how the energy mix should be made in that competition should be necessary.

“It cannot be that in 2019, we still have a [monopoly-controlled] company and that you and I, and every South African, can’t choose from whom which electricity [producer] to purchase and what kind of electricity we purchase.”

She blamed the government for allowing Eskom to be sold off, piece by piece to the highest bidder in what she described as an ingenious, diabolical plan of state capture.

“The maintenance of our stations were completely ignored because money was being siphoned off to the highest bidder, and to soften certain pockets of certain families. We know that coal was used as a catalyst in this entire endeavor and the introduction of an ISMO Bill was stopped because the introduction of private energy producers would have stopped the theft of money from this energy producer because private companies wouldn’t have allowed this endemic corruption to happen the way it happened in Eskom over the years.”

According to Mazzone, the country is suffering from the consequences of maladministration, which is why the party proposed a piece of legislation called the Cheaper Electricity Bill, which would allow independent power producers to come onboard to compete. She said that parties needed to work together to save Eskom by opening the energy market to competition, which would bring down various costs.

“Eskom would be split into two: the transmission, remaining the property of the country, and the generation, slowly moving into a privatization section. We would like to see Petro SA slowly moving into an agreement with the government, reducing the tax cost of diesel.”