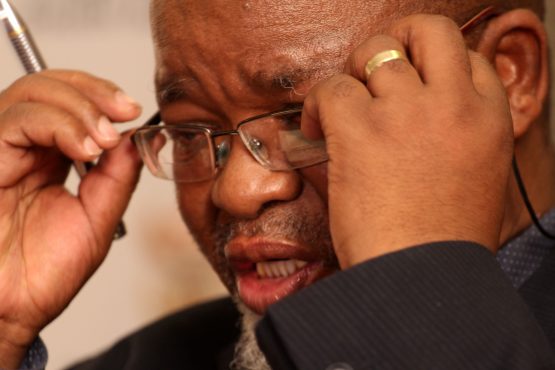 Neither the Presidency nor the governing ANC would be drawn into commenting on allegations that Mineral Resources and Energy Minister Gwede Mantashe reportedly claimed to have bribed two Sunday World journalists to bury an article about his alleged extramarital affair.

The newspaper on Sunday published a response from Mantashe, claiming that he had declined to answer their questions about a love triangle story involving him, Finance Minister Tito Mboweni and Lerato Habiba Makgatho.

According to the response the paper published, Mantashe had begged two journalists not to publish the story and paid them. He, however, would not reveal their names and said the publication could go ahead and write the story as that was his comment.

On Tuesday, Mantashe denied the claim.

A statement issued by Moferefere Lekorotsoana, chief of staff in the Ministry of Mineral Resources and Energy, reads: “The statement attributed to him seems to have created an impression of him being involved in the act of bribery. Mr Mantashe is clear that none of the sort occurred.

“Further, attested to by the newspaper, there was no verification of these allegations prior to the publication of the story.

“Mr Mantashe, both in his personal capacity and that of being the executive authority, believes in upholding the integrity of the media; and media freedom.”

Sunday World has hit back at Mantashe following his denial. Editor Makhudu Sefara told News24 he had recorded his conversation with Mantashe. He challenged the minister to sue the newspaper.

“We reject the claim by the minister that he never said he paid two journalists. Not only did he say this to the reporter, I as the editor also called him to verify the claims that were in the article before me. Mr Mantashe, in very clear terms, told me that he paid the reporter’s colleagues,” Sefara told News24 on Tuesday.

Spokesperson for the Presidency Khusela Diko told News24 that she would not comment on the issue, nor would a statement be issued.

ANC spokesperson Dakota Legoete took a similar line, saying Mantashe had not given the party a full report. Legoete said the ANC would respond “later” on Tuesday afternoon.

The EFF on Tuesday called on Mantashe to step down, saying it was “deeply concerned” about the allegations.

“As the EFF, we believe these allegations may be true and call on Mantashe to step down as minister and Member of Parliament for engaging in unethical and corrupt relations with the media,” EFF spokesperson Mbuyiseni Ndlozi said in a statement.

“What Mantashe has done is dangerous for our democracy, since it compromises the standing of the media in society,” Ndlozi said.

The EFF called on the Sunday World to release the evidence of Mantashe’s so-called claims.

The DA on Monday asked parliament’s joint committee on ethics and members’ interests to probe conduct relating to Mantashe and claims that he bribed journalists.

DA energy and mineral resources spokesperson Kevin Mileham said Mantashe had essentially admitted to bribing two journalists, and that it was clearly an admission of guilt for which he needed to be held accountable.

“His comments are in violation of the Code of Ethical Conduct and Disclosure of Members’ Interests of Parliament, which states that a member is in breach of the Code if he or she, amongst other clauses, contravenes section 4.1 of the Code,” said Mileham.

Sanef said in a statement that brown-envelope journalism was completely counter to journalism ethics and it would be writing to Mantashe to ask him to reveal the names of the journalists involved.