After negotiations with UDM leader Bantu Holomisa, the DA is confident it will win back the City. 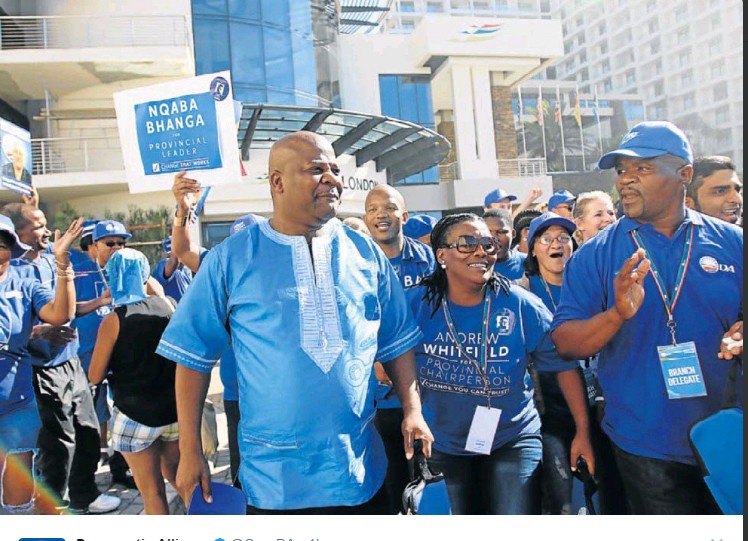 The DA in the Nelson Mandela Bay Municipality will take its cue from developments in the City of Tshwane in a bid to regain the metro, its Eastern Cape leader, Nqaba Bhanga, said on Thursday.

The party has been lobbying for support from smaller parties since the removal of the UDM’s Mongameli Bobani in December last year.

Bobani was removed after his alliance with the ANC and the so-called Black Caucus fell apart.

His removal led to a vacuum in the City, forcing the ANC to vote in his deputy, Thsonono Buyeye, as acting mayor.

Bhanga, who is the DA’s mayoral candidate, is hoping to take over as soon as the speaker grants his motion for fresh council elections.

Speaking to News24, he said the party was watching the developments in the embattled Tshwane closely.

“By the look of things, we will be able to get guidance on how the party handles Tshwane. Then, we are going to call for another council meeting. Democracy and the Constitution cannot be suspended. Those in the executive are using Covid-19 to run away from the processes of democracy.”

Tshwane much like the Nelson Mandela Bay came under control of the DA through an unstable coalition with the EFF during the 2016 local elections.

While Tshwane has been under the control of the DA, its relationship with the provincial government has been strained.

Bhanga said the City was skating on thin ice as no council meeting had been convened since before the lockdown.

He added he would write to the speaker next week, requesting that the council should convene a virtual meeting to elect a new mayor.

“The law says the council must sit. I intend to write to the [Department of Cooperative Governance and Traditional Affairs] provincially and nationally. The first item of the next council will be the election of a new mayor and they know this,” Bhanga said.

After negotiations with UDM leader Bantu Holomisa, the DA is confident it will win back the City.

The DA has 57 of the council’s 120 seats. The ANC has 50 and the EFF six. The UDM has two, while COPE, the ACDP, PA, AIC and United Front have one each. This means the DA needs four more seats for a majority coalition.

While it is expected COPE and the ACDP would work with the DA, as it does elsewhere, it would still need the UDM’s two seats, even if the PA – which has played on both the DA and ANC’s sides on different occasions – enters the coalition.

Meanwhile in the country’s capital, the election of a new mayor and city manager is set to take place this weekend as per last month’s high court judgment which overturned a decision by the Gauteng government to dissolve the municipality.

In March, the province invoked Section (1)(c) of the Constitution, which meant the municipality was placed under administration, dissolved, and an election for new leadership had to be held within 90 days.

The Gauteng High Court in Pretoria found the move to be unlawful.

On Thursday, Cooperative Governance and Traditional Affairs MEC Lebogang Maile said he would challenge the ruling in the Constitutional Court.

Decision to place City of Tshwane under administration unlawful, ConCourt rules
2 weeks ago
2 weeks ago
PREMIUM!

Decision to place City of Tshwane under administration unlawful, ConCourt rules
2 weeks ago
2 weeks ago
PREMIUM!