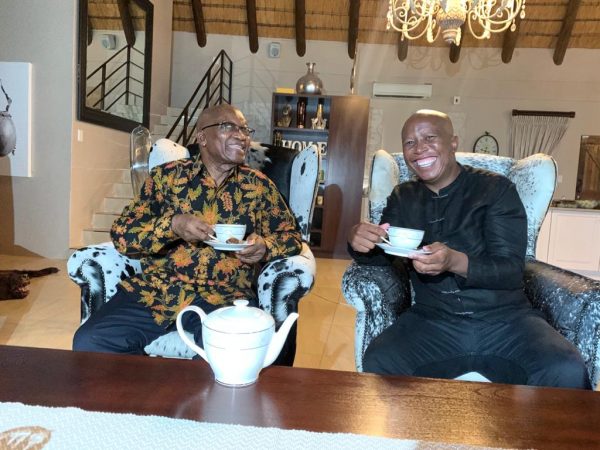 Malema on Friday landed in Zuma’s Nkandla homestead in KwaZulu-Natal (KZN) via helicopter after requesting a meeting with him on social media.

This after Zuma released a statement on Monday saying he would defy a Constitutional Court (ConCourt) ruling compelling him to appear before the Commission of Inquiry into State Capture.

In his statement, the former president claimed he was being mistreated at the commission.

“The meeting went very well and the tea was very hot and sweet. So, the practice of having tea is a slow process, you can’t gulp it like you do with other beverages, you have to take your time. Essentially it was a meeting with the president [of the EFF] and the former president [Zuma],” he said.

Pambo remained mum on what was discussed during the tea session and further insisted that black people were allowed to meet over tea.

READ MORE: Malema tells Maimane, Habib and Hanekom to stay out of his business

The meeting came as a surprise to the nation as Malema had a very public fallout with Zuma, after being one of his staunchest supporters for years.

[In Pictures]: The CIC @Julius_S_Malema at the Former President of South Africa, Jacob Zuma’s Homestead in Nkandla, having TEA. pic.twitter.com/1JzFNz2lIw