Addressing the UN Human Rights Council, Guterres warned of white supremacy and neo-Nazi movements that were growing daily and becoming a 'transnational threat'. 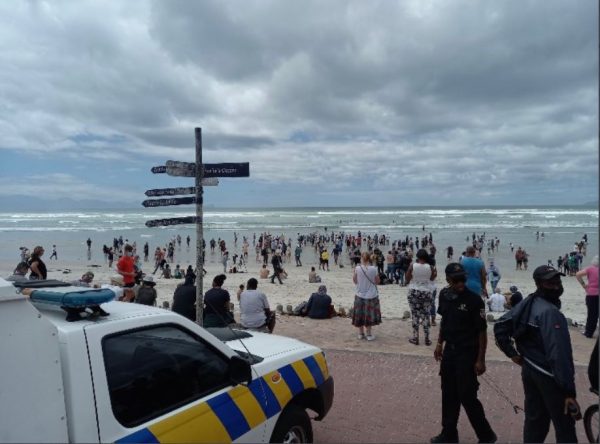 About 500 people descended on Muizenberg beach earlier this year to protest against the beach ban during Level 3 lockdown regulations. Picture: Screengrab

Addressing the UN Human Rights Council, Guterres warned of white supremacy and neo-Nazi movements that were growing daily and becoming a “transnational threat”.

“The danger of these hate driven movements is growing by the day. White supremacy and neo-Nazi movements are more than domestic terror threats. They are becoming a transnational threat.

“Individuals and groups are engaged in a feeding frenzy of hate fundraising, recruiting and communicating online both at home and overseas, travelling internationally to train together and network their hateful ideologies,” said Guterres.

The rot of racism eats away at institutions, social structures & everyday life — often invisibly & insidiously.
I welcome the new awakening in the global fight for racial justice, a surge of resistance against being reduced or ignored — often led by women & young people.

“Racism and racial inequality still permeate institutions, social structures and everyday life. We must do more than merely condemn expressions and acts of racism. We must dig deeper. And we must act.”

The EFF said it had been vindicated by the remarks and slammed minority groups that have travelled to the USA seeking sympathy from former US president Donald Trump.

“The ruling party leaders wine, dine and kiss them in every public platform seeking validation from the most cruel system of exploitation that continues to kill and abuse farm workers, domestic and retail shop workers,” the EFF said.

It further tore into Muizenberg beach protesters, when about 500 people descended to protest against the beach ban during Level 3 lockdown regulations.

“These groups had the audacity to invade beaches in the midst of the Covid-19 pandemic, block roads and burn police vehicles, conduct that would invite a repeat of Marikana massacre if it were Africans.

The EFF was referring to criticism of police treatment of white protesters compared to black protesters.

Recently they were highly criticised for using water cannons on Sassa beneficiaries to maintain social distancing.

“We have repeatedly said that white supremacy exists, particularly in South Africa and we received a vicious backlash from apartheid apologists condemning us as enemies of social cohesion and unity, coercing us to accept the utopian doctrine of Rainbow Nation,” the EFF said.

The EFF further slammed Senekal protesters and former president FW de Klerk, who said he did not “fully agree” with the UN’s ruling that apartheid was a crime against humanity

“White leaders in South Africa have denied that apartheid is crime against humanity with shear impunity. We have been castigated and condemned for calling out white supremacy for what it is in Brackenfell, Senekal, Clicks and in many other instances. This should stop,” said the party.