According to the City, about R2m was spent in 2019/20 to upgrade and paint the facility in preparation for the festive season. 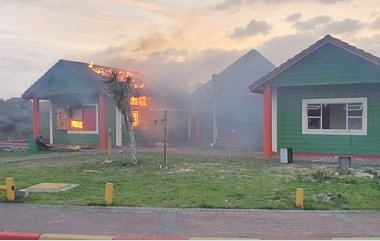 Three people were arrested for public violence on Thursday after buildings were set alight at Monwabisi Resort in Khayelitsha, Cape Town, during a protest, police said.

He said protesters went over the road and forced their way into the resort before burning down two buildings.

“This is not the first time that this resort is targeted in this manner, and it really is shameful that public funding will now have to be diverted from other crucial projects to fix the damage,” he said.

“There is simply no valid reason to destroy a beautiful recreational facility that has for years been used by the residents of Khayelitsha and surrounds.”

According to the City, about R2m was spent in 2019/20 to upgrade and paint the facility in preparation for the festive season.

“It is unfortunate that Monwabisi Resort has become a target for community protests. Not too long ago, a vehicle was burnt down at the resort,” said Plato.

The resort was currently closed. Plato said the actions put in danger security personnel and contractor staff who were on site throughout the year, completing repairs and maintenance.