Police, however, say the student, Kamogelo Chiota, was not killed. 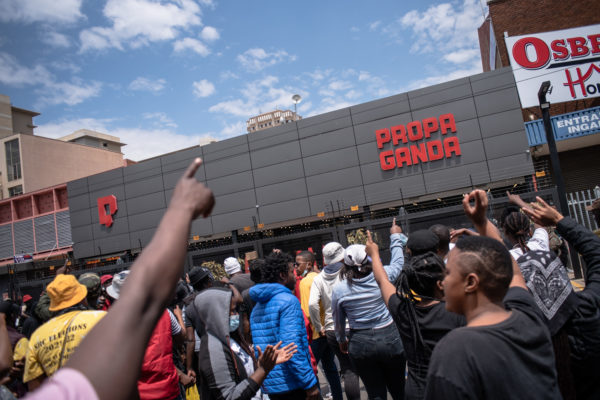 TUT students protest outside Propaganda a club in the Pretoria CBD where they allege a fellow student was killed the night before, 22 October 2021. Picture: Jacques Nelles

A Tshwane University of Technology (TUT) student was allegedly shot and killed outside a well-known club in the Pretoria CBD on Thursday night.

The student, Kamogelo Chiota, was, according to two students who spoke to The Citizen, a third-year student due to graduate in just a few months.

Fellow TUT students gathered outside Propaganda Club on Friday morning to protest the death and are demanding that the club be closed down.

One student said Chiota was “gunned down” outside Propaganda Club, adding that no case had been opened. He also said he witnessed Kamo’s lifeless body being dragged away from the scene.

Another student, Sylvester Shongwane, told The Citizen that, according to his friend who was at the scene, the man who shot Chiota had an altercation inside the club, and was kicked out.

It is alleged the man did not leave Propaganda, but instead waited outside until he saw the person who he had words with. Shongwane said the man mistook Chiota for the person, and shot him once through the neck. Chiota reportedly died at the scene.

An ambulance was called, as well as police, but Shongwane said no bullets were collected, and alleged that Chiota’s blood was simply washed away by the club.

Shongwane said Chiota’s brother had joined the protesting TUT students in solidarity. Shongwane also said the general sentiment at the protest was that Propaganda Club should pay for Chiota’s funeral and that his family should be compensated.

“The young man was about to graduate. He was going to change his life and his family’s. They have taken food away from the family.”

Shongwane said they also wanted police to pay attention to the students, who only “want justice for Kamo”.

The police, however, say that Chiota was not murdered outside Propaganda Club.

“No one died. A security officer working at the club was shot by an unknown person. Police have opened an attempted murder case and no one has been arrested as the unknown suspect fled the scene,” said Colonel Dimakatso Sello.