Eight people were arrested on the N3 in Harrismith on Tuesday. 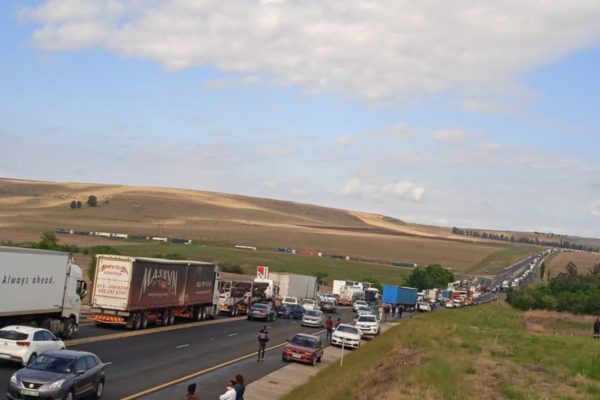 Truck drivers protesting on the N3 near Harrismith on 26 October 2021. Picture: Facebook/SA Trucker

Following protests demanding to discuss the hiring of foreign truck drivers with Minister of Transport Fikile Mbalula since Monday, a media briefing has been scheduled for Wednesday afternoon.

Protests reached boiling point on Tuesday, with about 30 drivers obstructing both sides of the N3 with the trucks.

This resulted in vehicles being backed up for more than a kilometre.

Drivers in the Eastern Cape were even prevented from driving on the N9 and N10 highways outside Middelburg on Tuesday as part of the demonstrations.

Mbalula met with protesting drivers on Monday and accepted their memorandum of demands, agreeing to set up a technical team to engage with government on the issues facing drivers.

Harrismith police confirmed on Tuesday they had arrested eight people on the N3 near Swinburne Farm for obstructing road users from freely using a national road.

Police said the drivers then took their keys and left their trucks on the road.

In addition to working with towing services to remove the trucks, they arrested a number of suspects, who are expected to appear before the Harrismith Magistrates Court soon.

They are facing public violence charges, and are being charged under the National Road Traffic Act.

In addition to the chaos, a petrol tanker was ablaze on the N12 east near Daveyton in Ekurhuleni on Tuesday night.

The Ekurhuleni Metro Police Department (EMPD) said the cause of the fire was not yet known, but that the incident resulted in the road being closed to traffic in both directions.

On Wednesday morning, the remains of the wreckage were still evident. It is not yet clear if the road has reopened.