A witness says the payment control form to authorise the prepayment was signed a month later to regularise the transaction. 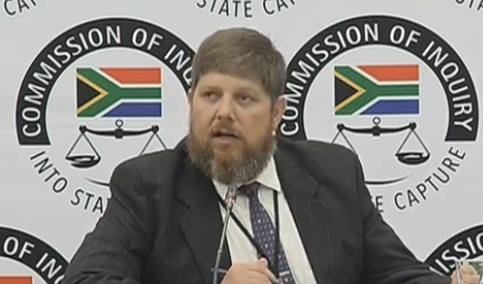 The commission of inquiry into state capture heard on Monday how a certain Eskom official authorised the power utility’s prepayment to Gupta-owned Tegeta for coal even though they would not regularly sign off on such a transaction.

The Commission will continue to hear Eskom related testimony of Mr. Gert Opperman. Opperman is explaining how R600m Prepayment was paid to Tegeta. He says he believes the right people would not have signed it as it has irregular.#StateCaptureInquiry

Contract manager at Eskom’s primary division Gert Opperman told the commission that the prepayment was signed off by an Eskom official sitting in the procurement office of the entity, which was “highly irregular” when people responsible for the coal supply agreement should have authorised the payment.

The commission heard last week from Snehal Nagar, the head of finance at Eskom’s primary energy division, that to affect the prepayment within hours from when the instruction was made, a pre-existing purchase order for Tegeta under the Brakfontein coal supply agreement was amended to reflect the R659 million payment.

Nagar said the processes to affect the payment were eventually followed and the Brakfontein payment was reversed and reflected accordingly.

READ MORE: Eskom prepayment to Tegeta was ‘startling’ and did not make sense – witness

The power utility agreed at the time to pay Tegeta almost R659 million in advance for coal on the same day it became clear that the Gupta-affiliated company was short of that same sum to purchase the Optimum coal mine.

Opperman said on Monday the prepayment was authorised by “someone who ordinarily would never authorise such a payment”.

The payment related to “alleged supply to Arnott power station” but from the contract linked to Brakfontein, which never supplied that power station, Opperman said.

The witness described that “the people who should have approved this originally” sought to rectify the transaction “to attribute the payment to the correct contract and the correct power station”.

“It’s an accounting exercise after the effect,” Opperman said, which was meant to “regularise” the payment.

The signatures of the management accountant, financial advisor, coal supply unit manager, coal supply manager are on the payment control form, however, a geologist did not sign it because there was no control quality check of the coal since it had not been delivered.

The payment control form for the prepayment to Tegeta was authorised by an official working in the office of chief procurement, Maya Bhama, which was “absolutely not” customary, Opperman told the commission, but he could not accurately recall her position.

“The management accountant and the financial accountant would have been, normally, the people that processed this payment.

“We now know [that this happened] in May … after the effect almost like a month after the effect. So, the signatories on this document, on this specific day would not have really done anything.

“It was merely a transfer of funds from the Brakfontein account to the Optimum account, that agreement.”

The chairperson of the commission, Deputy Chief Justice Raymond Zondo, questioned Opperman whether those who had signed the form were not in the wrong.

“Chair, the signatories on this control sheet, on this day, were required to perform the transfer of these funds from the Brakfontein contract to the Optimum contract.

“So, the management accountant, my signature, and my senior’s signature were required from a control point of view to have the records where the funds were transferred from the Brakfontein contract where it was incorrectly paid a month earlier to the [Optimum] contract where it belongs and from which the monthly delivery volumes will be deducted as the coal was delivered over the next couple of months.”

Festive season: Here's when Covid and load shedding will be 'on duty'
8 hours ago
8 hours ago

SA not obliged to accept conditions, says Ramaphosa on COP26 green deal
21 hours ago
21 hours ago

Power cuts are here to stay, Ramaphosa tells Parliament
1 day ago
1 day ago

Festive season: Here's when Covid and load shedding will be 'on duty'
8 hours ago
8 hours ago

SA not obliged to accept conditions, says Ramaphosa on COP26 green deal
21 hours ago
21 hours ago

Power cuts are here to stay, Ramaphosa tells Parliament
1 day ago
1 day ago