Jonas defends ‘inaccuracies’ in his statement to Madonsela

The former deputy finance minister says the preparation of the initial statement to the public protector was rushed and he did not sign it. 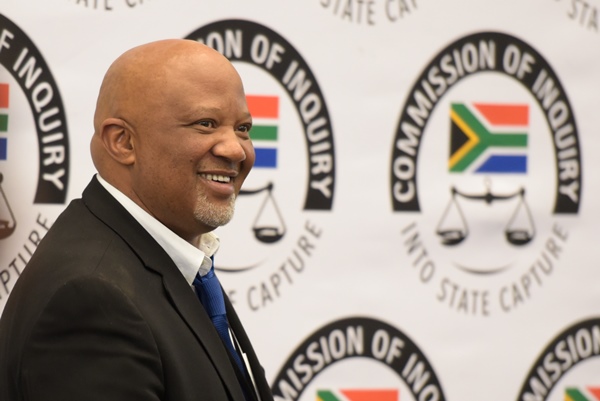 Former deputy minister of finance Mcebisi Jonas ahead of the start of the day’s proceedings at the Commission of Inquiry into State Capture held in Johannesburg, 24 August 2018. Picture: Refilwe Modise

Advocate Piet Louw, the legal counsel of Duduzane Zuma, former president Jacob Zuma’s son, cross-examined former deputy finance minister Mcebisi Jonas at the commission of inquiry on Friday, interrogating the veracity of the allegations made by Jonas that one of the Gupta brothers had offered him a cabinet position.

Jonas told the commission last year that on October 23, 2015, he met with one of the Gupta brothers, the young Zuma and Fana Hlongwane at the Gupta family residence in Saxonworld, where he was allegedly offered the position of finance minister and an R600 million inducement.

Jonas also testified that one of the Gupta brothers, Ajay or possibly Rajesh, had not only made the offers but had also threatened to use information in his possession to destroy the then deputy minister’s political career, before later threatening his life if he disclosed that the meeting had taken place.

Louw said on Friday that there are “two completely conflicting versions only about a small part” of the events of the day in question.

In his cross-examination, Louw sought to deal with issues of “contradictions, probabilities and credibility” and glaring inconsistencies in the evidence before the commission.

Jonas said the statement contained a number of contradictions around dates and its narrative because it had been rushed.

Adv Louw asks if he saw his statement before it was send to PP. Jonas says he had a chance to see the statement, but there was a rush to submit. #StateCaptureInquiry

Jonas said he did have a look at the statement and pointed out some of the issues he had with it but those “were never corrected”.

Jonas says there were parts that were incorrect in the statement. #StateCaptureInquiry

“It was not wrong, the content, broadly speaking, was correct,” Jonas said, adding that there are points that were incorrect.

Louw highlighted that one of the incorrect points had been that Jonas took the decision to meet Hlongwane so he could hear him out on the issue of meeting the young Zuma and the Gupta family.

Jonas said he could not sign the statement because of the inaccuracies it contained, to which Louw interjected, questioning whether the witness, as deputy minister at the time, had no qualms with issuing a statement to the highest investigation at the time which contained errors.

“If I had to sign the statement, I would have gone through it with a fine comb,” Jonas said.

Adv Louw asks as the Deputy minister at the time why he allowed a statement with inconsistencies to be provided the Public Protector. Jonas says if he had signed the statement by his lawyer he would have corrected it. #StateCaptureInquiry

Louw said according to the statement to the public protector, Jonas knew that Hlongwane would be present at the meeting of the day in question.

“Can I correct that, I agreed to Fana that I will meet Duduzane,” Jonas said, adding that thereafter he obtained Zuma’s number and communicated with the former president’s son, arranging the meeting which initially was at the Hyatt Hotel in Rosebank, Johannesburg and that he was not aware that Hlongwane would be present.

Jonas maintains that it is incorrect that he went to Saxonwold knowingly that Fana Hlongwana was at the Gupta residence. #StateCaptureInquiry

Louw asked Jonas whether he had questioned Zuma, when they met at the hotel, what the meeting of the day in question was about and whether he questioned where the meeting was being relocated to when Zuma suggested that it should move to a more private location because other people would join the meeting.

“I didn’t … I knew he was going to explain to me what the meeting was about … and by the way, at the time, I didn’t have any mistrust about what his intentions were,” Jonas said.

Jonas confirm that he left his car and protector at the Hyatt hotel and went to Saxonwold with Duduzane. He did not ask what the meet was about. He says he thought purpose of the meeting will be explained at the meeting. #StateCaptureInquiry

Louw further questioned Jonas why he had decided to leave behind his bodyguards and official state vehicle for an unknown destination and to hold a meeting on topics unknown to him.

Another incorrect interpretation in Jonas’ statement to the public protector is that after the meeting at the Gupta residence the former minister asked Zuma and Hlongwane to take him to the airport.

Jonas says as he was about to leave Saxonwold he asked Duduzane to leave him at the airport. #StateCaptureInquiry

“How is it possible for a deputy minister to have a statement issued about something so sensitive and so important containing such gross factual inaccuracies?” Louw asked.

Jonas noted that he did not sign the statement and that during discussions with the public protector he had an opportunity to be more detailed, and that his first “comprehensive” statement had been the one he submitted to the commission.

Jonas Maintains that he submitted a comprehensive statement with the commision. #StateCaptureInquiry

Louw asked Jonas why he had taken a long time to disclose the allegations around the said meeting – save for his disclosure to then finance minister Nhlanhla Nene and current Minister of Public Enterprises Pravin Gordhan – and why he had not reported what transpired, specifically the threat to his life, to law enforcement.

Louw asks Jonas why he did not report the matter at the law enforcement agencies.
Jonas says at the time he did not trust the police and the Hawks at the time. He says the situation was hostile.#StateCaptureInquiry

“I explained this in my affidavit quite extensively …the situation at the time was very hostile … I didn’t trust the police, I didn’t trust the Hawks,” Jonas said, adding that one of the Gupta brothers had told him during the meeting in question that the controversial family controlled law enforcement agencies, which he believed and which is now evidenced by recent reports around those allegations.

Louw asks Jonas about his encounter to the Hawks
Jonas says he got a call from General Mnonopi informing him that she is leading the case, she requested to meet with him and close the case. She told him that she prepared a statement for him to sign. #StateCaptureInquiry