Bag of money slid into pocket of parliament’s chair of chairs, says Agrizzi 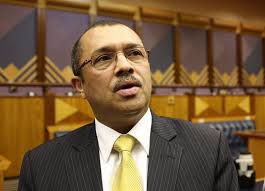 The purpose of the visit, Agrizzi told the commission, was to have a discussion about Vincent Smith, who was the chair of the Parliamentary Portfolio Committee on Justice and Correctional Services and at the time was “anti-Bosasa”.

Bosasa CEO Gavin Watson told Agrizzi that Frolick would be instrumental in winning over Smith so that the company would not lose any of its contracts with the department of correctional services (DCS).

Agrizzi told the commission that he drafted a document which would be used to convince Smith that the tender the company had with the DCS had been beneficial for the department.

Frolick’s visit was to show parliament’s chair of chairs the benefits which Bosasa had created and use that information to convince Smith that Bosasa was “not a bad company”.

Agrizzi further said that he drew up a letter of introduction and asked if Watson would sign it and he refused, instructing that the company’s chairperson at the time should sign it. According to Agrizzi, Watson did not want to sign the letter because him doing so would compromise him with other ANC members as he would be seen as imposing himself on Smith.

Agrizzi said Watson had asked Frolick to do everything possible to win over Smith or try to move him out of the chairpersonship of the committee.

Agrizzi further said that during the visit, Watson slid a security bag, which he earlier testified would contain money, into Frolick’s jacket pocket.

The witness said that at that stage, Smith was “a thorn in the flesh” raising valid points in his opposition to Bosasa.

Watson instructed that Frolick should receive a monthly R40,000 payment.

After the visit, Agrizzi travelled to Port Elizabeth and handed over a security bag to Watson’s brother, Valence, who then handed it to Frolick.

Agrizzi said that a week after the meeting with Valence and Frolick, Watson called him and instructed him to fly down to Cape Town along with Bosasa’s chair at the time to meet Frolick and Smith, a meeting which had been coordinated by Frolick.

The witness said flight and hotel records could be obtained to corroborate that they had travelled to Cape Town.

Agrizzi said they met Frolick at parliament, who took them into an empty office where they waited for a while before Frolick returned with Smith who was “visibly” annoyed by the presence of the Bosasa officials.

“[Smith] was very abrupt,” Agrizzi told the commission, adding that Smith left soon after Agrizzi had tried to give him a pre-prepared package which was meant to convince Smith that Bosasa had been beneficial to the DCS.

Thereafter, Frolick took them on a brief tour of parliament, during which they bumped into several people who can attest that they were there, Agrizzi said, adding that they then had lunch at parliament which Frolick put on his card.

“It wasn’t a meeting, it was an introduction, it was supposed to be meeting but it did not go there,” Agrizzi said about the encounter with Smith.

He said he raised his concerns with Frolick about the brief encounter with Smith and that Frolick responded by saying he need not worry because that was how politicians acted and that he should be satisfied they “were starting to break the ice”.

Angelo Agrizzi's health back in spotlight as corruption case resumes
3 days ago
3 days ago
PREMIUM!

Angelo Agrizzi's health back in spotlight as corruption case resumes
3 days ago
3 days ago
PREMIUM!