Forensic auditor Trevor White testified that Panday operated on a profit margin that averaged 'three times the price they were procuring the goods' for. 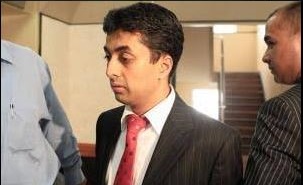 “Panday was paid approximately R47m from November 2009 to August 2010,” forensic auditor Trevor White told the commission as it turned its attention to the capture of law enforcement agencies.

White testified that Panday operated on a profit margin that averaged “three times the price they were procuring the goods” for.

He achieved this through various entities registered in his name and the names of his wife, mother and brother-in-law. The names include GoldCoast Trading CC, Unite Msanzi Trading and Projects CC, Valotone 21 CC, Bravosat 25 CC and Kaseev Traders CC.

“It appears the entities were registered in [the names of] people linked to him, put on the database and they were used to provide quotes ‘competitively’ against one another.

“When the work was done with SAPS, they backdated their resignations to say they were never part of these entities. The point is that the impression [they hoped to create] was that these companies were independent of Panday,” White said.

The companies received “significant” orders from the police within a month of their creation dates, despite the fact that they had no previous business experience.

“Gold Coast provided accommodation and the other entities didn’t do this. They quoted against one another for goods supply,” he said.

The goods supplied were anything from a generator, sleeping bags, beds and blankets, to sunscreen.

Panday is the key suspect in the infamous 781 case that investigated irregularities in police supply chain management procurement processes, in the months leading up to and during the 2010 World Cup.

The charges in the criminal investigation were later withdrawn.

Then-director of public prosecutions in KZN, advocate Moipone Noko, cited a “lack of reasonable prospects of a successful prosecution” and “agendas among the parties” as reasons for the withdrawal of the charges.

In 2016, the National Prosecuting Authority (NPA) reinstated the corruption charges against Panday. The charges related to an alleged attempt to bribe suspended KZN Hawks head Johan Booysen to “backdate a report relating to the investigation about irregular procurement processes in respect of accommodation during the 2010 World Cup”.