In May 2016, the ANC called on whistle-blowers to approach law enforcement agencies about the claims. 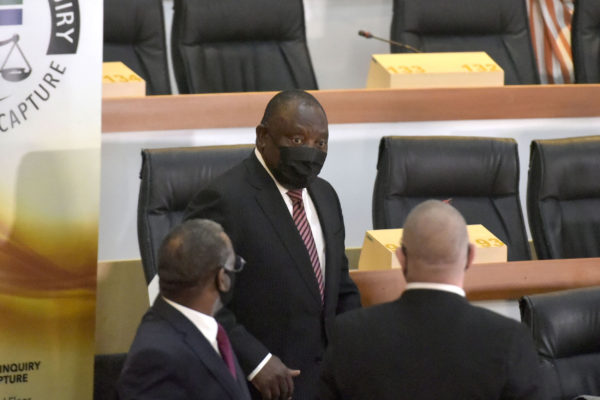 ANC president Cyril Ramaphosa says the party’s decision in 2016 calling on its members to provide information about alleged state capture activities to law enforcement authorities was not a cop-out from it dealing with the allegations.

Ramaphosa returned to the Commission of Inquiry into Allegations of State Capture on Thursday for his second day of testimony in his capacity as ANC president.

He faced tough questions about the ANC’s failure to exercise its parliamentary powers to promptly institute an investigation into the allegations of state capture and wide-scale corruption levelled against the Gupta family and former president Jacob Zuma.

In May 2016, the ANC instituted its own investigation into state capture claims after then deputy finance minister Mcebisi Jonas said the Gupta family had offered him a job as finance minister before Nhlanhla Nene was fired in December 2015.

At the time, ANC secretary-general Gwede Mantashe announced that of the eight people who approached the party with claims of state capture, only one handed in a written submission.

Ramaphosa told the commission’s chairperson, Deputy Chief Justice Raymond Zondo, this was not a cop-out because no one was willing to come forward and provide information.

“It was thought at the time the other institutions the Public Protector [and] the police would possibly have a much greater grip on all these matters because they would go beyond maybe what Parliament could do. They would immediately find fault and have prosecutorial powers,” Ramaphosa said.

“But if you look at it with insight, I would say the two would not be mutually exclusive. And, if anything, both tracks could have been easily followed to have a parliamentary process as well as another more effective investigative process. So, I would say it was not a cop-out. I think it was an alternative motion that was being put on the table.”

Ramaphosa also said the ability of any political party to act on allegations of malfeasance depended not only on its formal rules and procedures, but on the balance of power in its structures.