Shortly after leaving the commission on Thursday evening, Mngoma shared a video of a police convoy on her Instagram account. 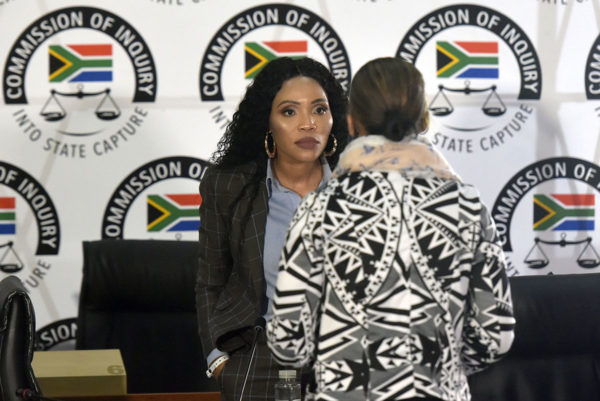 The estranged wife of former finance minister Malusi Gigaba, Norma Mngoma, is expected to return to the Commission of Inquiry into Allegations of State Capture on Friday morning after her testimony was abruptly stopped on Thursday evening.

Commission chairperson, Deputy Chief Justice Raymond Zondo, was forced to end proceedings at the commission in Johannesburg after he was informed there were “serious security reasons” for the inquiry to adjourn.

Zondo said the commission would resume in the morning without disclosing details of the security-related issues.

Mngoma is set to testify from 9am.

#Norma just posted this video on her Instagram. I wonder what this is all about pic.twitter.com/3TLLsbvLRN

The commission will also hear more Gupta-related evidence from her estranged husband later in the day.

Shortly after leaving the commission on Thursday evening, Mngoma shared a video of a police convoy on her Instagram account.

She said she was “in safe hands” and thanked the police for protecting her.

“I want to thank the South African Police Service for protecting me. I can’t say much about what happened but I want to assure everyone I’m in safe hands,” she said.

Before the adjournment, Mngoma told the commission Gigaba wanted to delete information about the Guptas from her electronic devices.

Mngoma said this happened after she had requested a divorce from her husband. Gigaba apparently asked her to delay the divorce, citing his preoccupation with preparing his submission for the commission and that he was completing his PhD.

Mngoma claimed that Gigaba did not want a divorce because that would mean that he would no longer enjoy spousal privilege during the inquiry, where Mngoma would be unable to testify against him.

“He [Malusi] came to me last year and said there was someone he knows in IT and wants to wipe information from my devices. I asked why and he said he was worried about the information I had on the devices,” she said.

Mngoma said she encouraged her husband to tell the truth but he declined.

She said a few days after, while they were in their home, Malusi informed her that the Hawks had arrived to wipe the devices.

“I went to the bedroom [accompanied by an officer] and took my iPad, laptop. They asked for my Huawei phone and I didn’t tell them about it,” Mngoma said.

After some wrangling over her device passwords, the Hawks officers took her devices in a plastic bag.

Two weeks later, Mngoma said the Hawks returned her devices but she was then arrested for damaging a Mercedes-Benz SUV.

READ NEXT: Malusi had phones wiped to avoid being ‘Brian Molefed’, claims Mngoma

Government ‘does not provide enough protection’ to whistleblowers
3 weeks ago
3 weeks ago
PREMIUM!

‘I didn’t put up my hand for this,' says former Trillian chief executive
3 weeks ago
3 weeks ago

Government ‘does not provide enough protection’ to whistleblowers
3 weeks ago
3 weeks ago
PREMIUM!

‘I didn’t put up my hand for this,' says former Trillian chief executive
3 weeks ago
3 weeks ago