Ondruska has until one hour before the draw, to be held next Thursday, to confirm his final four-man team. 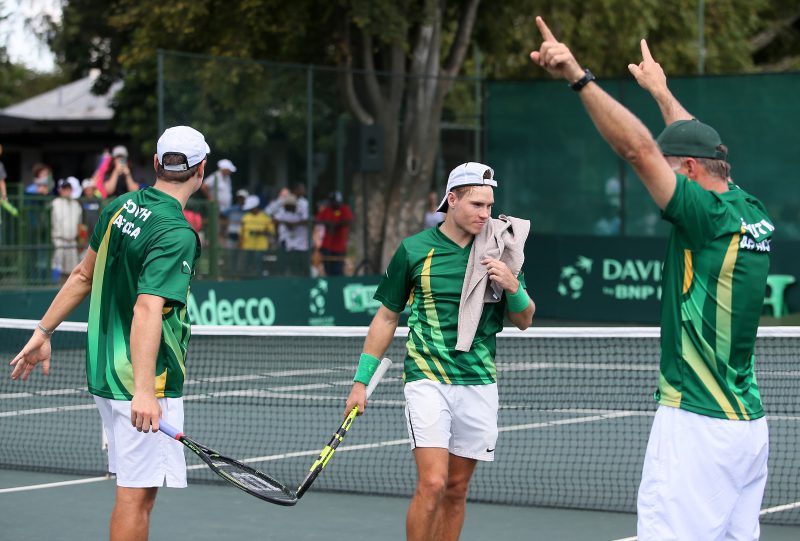 PRETORIA, SOUTH AFRICA – MARCH 5: Team captain, Marcos Ondruska (R) celebrates with Ruan Roelofse (L) and Dean O'Brien of South Africa after they won against Mike Scheidweiler and Ugo Nastasi (LUX) in the doubles during day 2 of the Davis Cup Tie between South Africa and Luxembourg at Irene Country Club on March 5, 2016 in Pretoria, South Africa. (Photo by Reg Caldecott/Gallo Images)

Nik Scholtz could play his first Davis Cup tie in three years next week after he was included as the No 2 singles player in the national squad announced by SA captain Marcos Ondruska on Tuesday. Scholtz was named alongside Davis Cup regulars Lloyd Harris, Tucker Vorster, Raven Klaasen and Ruan Roelofse in the five-man squad for the first-round Euro-Africa Group 2 tie against Estonia at Irene Country Club.

While Dean O’Brien would join the national outfit as a practice partner at their buildup camp, he would not be considered for selection. With injured SA No 1 Kevin Anderson remaining indefinitely unavailable, the squad would be spearheaded by promising 19-year-old Harris, No 284 in the ATP singles rankings, and world No 11 doubles specialist Raven Klaasen.

Ondruska would have until one hour before the draw, to be held next Thursday, to confirm his final four-man team, and with Roelofse set to join Klaasen in the doubles rubber, Scholtz and Vorster were expected to contest for the second singles spot. Though the South Africans, lying 58th in the Davis Cup rankings, were 21 places above the Estonians, Ondruska insisted they faced a difficult challenge in the hard-court altitude clash.

“The players are fit, and they all had great off-seasons, but it’s going to be a tough tie,” Ondruska said. “Their No 1 player (Jurgen Zopp) used to be in the top 100, and though he’s since dropped out (to No 314), I still expect him to still be able to play.”

The national squad last competed in a 3-2 defeat to Lithuania in their second-round tie in Kaunas in July last year, and despite turning out in the Group 2 division for the fourth year in a row, Ondruska remained confident of their long-term ability as they regrouped for the new season. The skipper believed they could ultimately claw their way back into the World Group after a lengthy hiatus from the top-flight division, with Kia coming on board to provide support as the team’s new sponsor.

“We need to try and find a path for us to reach the World Group,” Ondruska said from his base in the United States. “Having Raven (Klaasen) on the team is a great first step, and opening the door by having conversations with Kevin (Anderson) is another step. Now we’ve also got a new sponsor which is willing to get behind our plans.

“If we want to be in the World Group we need a professional team and professional structures to support that, so it’s great to have Tennis SA behind us as well.”

The hosts would need to defeat Estonia to progress to the second round, in order to keep their Group 1 promotion hopes alive, while a defeat would send them to the relegation playoffs.