It was a good day for Caster Semenya too as the Iron Lady, who achieved her objective of a 400/800m double with ease. 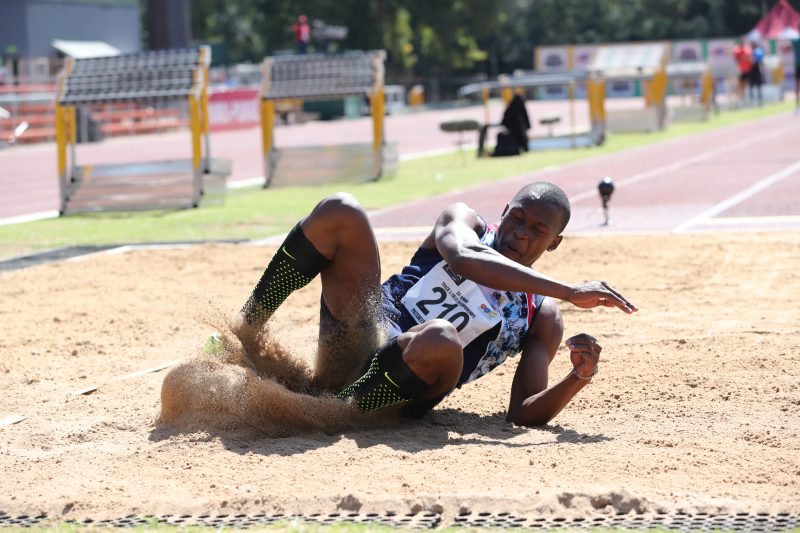 Manyonga launched a leap of 8.65m with his first attempt, adding three centimetres to his own national record as he climbed to 11th place in the all-time world rankings.

Though he withdrew from the rest of the competition with a groin injury, he won comfortably, despite Ruswahl Samaai producing a world-class jump of 8.49m to earn the silver medal.

“Doing run-throughs after my first jump I felt pain in my groin and couldn’t jump anymore,” Manyonga said.

“But this is the best competition I’ve had in my life. For second place to jump 8.49m is very good.”

After taking silver in the 100m race, Van Niekerk laid down the hammer in the men’s 200m dash.

The Olympic 400m champion and world record holder, who was set to double over 200m and 400m at the World Championships in London in August, clocked 19.90 over the half-lap distance.

Despite easing down over the last 20 metres, he chopped 0.04 off his personal best and was just 0.03 outside Anaso Jobodwana’s national record, with pre-race favourite Akani Simbine settling for second place in 20.15.

“I don’t know what happened there (at the end). I think I got a bit ahead of myself and I switched off a bit when I saw how good the time was,” Van Niekerk said.

“I was also a bit shocked that the other guys weren’t giving me as much of a headache as I expected from them.

“But it’s a long season so I didn’t want to get too far ahead of myself, and we all know the goals now are the World Championships and the European season.

“We’re just trying to look after ourselves and maintain our bodies so we can represent SA well on the international circuit.”

Versatile middle-distance specialist Caster Semenya retained her national titles in the 400m and 800m events, winning the one-lap race in 51.60 and taking the two-lap final in 2:01.03.

Semenya confirmed she would run the 400m, 800m and 1 500m events at the SA Student Championships in Cape Town next week.

Back on the infield, Pretoria giant Orazio Cremona won the men’s shot put with a massive 21.12m heave, with Jaco Engelbrecht securing a personal best of 20.63 to grab second spot.

In the last event of the annual championships, veteran hammer thrower Chris Harmse earned his 22nd consecutive national title with a best effort of 70.53m.