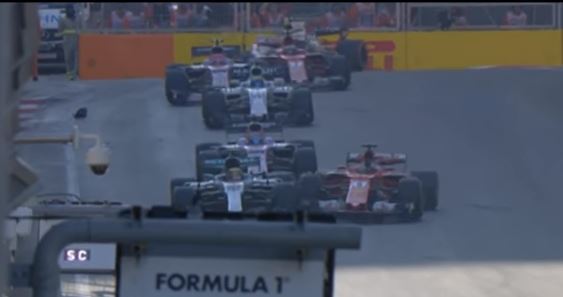 Lewis Hamilton accused Formula One rival Sebastian Vettel of disgracing himself and deliberately driving into his car as a bitter clash between the world championship rivals dominated Sunday’s Grand Prix in Azerbaijan.

Red Bull’s Daniel Ricciardo won in Baku after a chaotic race which saw Ferrari’s Vettel given a 10-second stop-go penalty when he steered into the back of race leader Hamilton‘s Mercedes under safety car conditions after a red-flag stoppage on lap 22.

The four-time champion seemed infuriated with Hamilton after the Briton slowed on the exit of Turn 15.

After the initial collision, the German gesticulated angrily with both hands as he pulled alongside his rival and hit the side of Hamilton‘s car.

After his penalty, imposed by the stewards for dangerous driving, Vettel recovered to finish fourth, one place ahead of Hamilton.

“Deliberately driving into another driver and getting away pretty much scot-free as he still came fourth, I think that’s a disgrace. I think he disgraced himself,” Hamilton said.

“Imagine all the young kids that are watching Formula 1 today and see that kind of behaviour from a four-time world champion. I think that says it all.

“If he wants to prove that he’s a man, I think we should do it out of the car face-to-face.

“Driving dangerously, which in any way can put another driver at risk… we were going slow, if we had been going fast it could have been a lot worse.

“It definitely sets a precedent within F1 and it also does for all the young kids that are watching us drive and conduct ourselves.

“They’ve seen today how a four-time champion behaves and I think, hopefully, that doesn’t ripple into the younger categories.”

Hamilton also denied the accusation that he had deliberately “brake-tested” his rival, arguing that he was merely “controlling the pace.”

“Like all the other restarts, I slowed down in the same spot,” he said. “He was obviously sleeping and drove into the back of me.”

Vettel was left fuming at the perceived injustice after being the only one of the two title rivals to be punished.

“In the end I don’t agree with the penalty that I got, because if you penalise me then you should penalise us both because that was not the way to do it,” the championship leader was quoted as saying on the F1 website.

“I think F1 is for grown-ups. The manoeuvre before was not necessary and obviously damaged my front wing. (It) damaged his rear also I think a little.

“That was not the right way to do it, exiting the corner, accelerating and then braking. I don’t think there was any point in doing that.”