The winning runner said he had only been aiming for a top-10 finish. 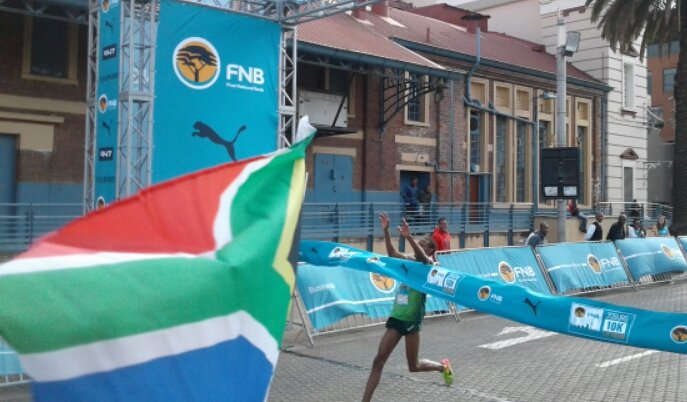 Thabang Mosiako delivered a thunderous kick in the closing stages to produce the performance of his career on Sunday, beating a packed line-up at the FNB Joburg 10k CityRun.

After a large lead group of nearly 20 men charged through halfway in 14:49, Mosiako made a break which was covered by national 10km record holder Stephen Mokoka and former SA half-marathon champion Lucky Mohale.

While Mohale soon faded, Mokoka put up a fight before Mosiako burst clear on a downhill section of the challenging course with less than two kilometres remaining, opening a gap to win in 29:51.

“I saw Stephen was dead and I told myself: you know what, just go,” said the 22-year-old Mosiako, who finished second at the South Region Half-Marathon Championships in Namibia last week.

“My aim was just to get top 10, so this is an amazing run for me, and I’m very happy with my result today.”

Mokoka held on to take second place in 30:15 and Gladwin Mzazi charged through the field in the closing stages to grab third spot in 30:35.

In the women’s race, Glenrose Xaba built on her impressive form, with the recently crowned national 4km and 10km cross country champion cruising to victory in 35:39.

Nolene Conrad finished second in 36:12 and Zimbabwean athlete Rudo Mhonderwa was third in 36:40.