Meanwhile, the Peek sisters capped off an impressive romp to the women's title. 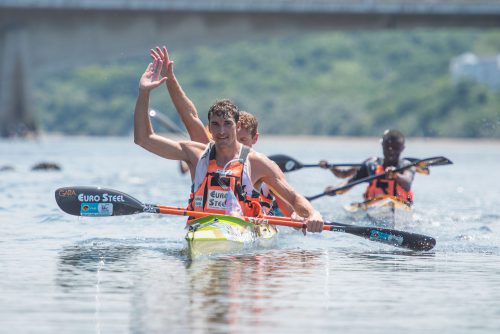 Euro Steel's Andy Birkett and Hank McGregor powered to the overall title on the third and final stage of the 2018 FNB Dusi Canoe Marathon on Saturday. Photo: Anthony Grote/Gameplan Media.

Pre-race favourites Andy Birkett and Hank McGregor broke clear after another hard-fought battle on Saturday, clinching a memorable victory at the FNB Dusi Canoe Marathon in Durban, while sisters Jordan and Cana Peek dominated the third and final stage to close out a convincing win in the women’s race.

With the top four men’s boats entering the last leg just three seconds apart, after Birkett and McGregor had been set back by a bent rudder on day two, the duo broke away in the closing stages to complete the 124km river race in eight hours, 12 minutes, 22 seconds (8:12:22).

Making a late tactical decision in a K2 contest that went down to the wire, leaders Siboniso Khwela and Siseko Ntondini opted to shoot the rapid at pumphouse weir, while Birkett and McGregor chose to run the portage.

Back in the water, the chasing pair managed to close the gap shortly before the mango rapid, laying down the hammer and storming past as they charged towards the coast.

It was Birkett’s eighth Dusi win in nine years, in the K1 and K2 divisions, while world marathon champion McGregor lifted the crown for the third time.

After slipping off the pace, Carl Folscher and Adrian Boros fought back to grab second place, 64 seconds behind the winners.

The Peek sisters, meanwhile, capped off an impressive three-day romp as they coasted to a commanding victory in 9:45:23, well clear of their nearest opponents.

Further back, closing a gap of more than five minutes on Bridgitte Hartley and Christie Mackenzie, the gutsy pairing of Jenna Ward and Hungarian paddler Vanda Kiszli surged into second place in the race to Blue Lagoon.

Hartley and Mackenzie held their composure, however, and clawed their way back to win a tight sprint for second position, more than eight minutes behind the winners, edging Ward and Kiszli into third spot by three seconds.