Gerda Steyn becomes only the second local women's athlete to win the race since 2002 while Kemboi holds the Kenyan flag high. 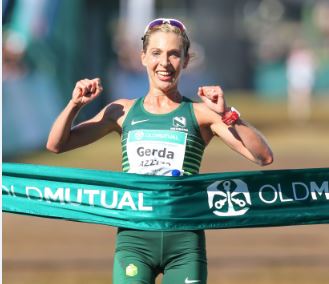 Kemboi broke clear on the rolling hills in the second half of the 56km race, and though he was visibly hurting in the closing stages, he hung on to secure a well-earned victory in 3:09:21.

He became the second Kenyan to win the annual contest, after compatriot John Wachira back in 2009.

While former winner Lebenya Nkoka of Lesotho was unable to catch a tiring Kemboi, he took second place in 3:10:29, and Comrades Marathon record holder David Gatebe was the first SA athlete home, finishing third overall in 3:11:12.

Steyn was equally dominant in the women’s race, pacing herself well before pouncing in the chase for the line, and after taking the lead from Polish athlete Dominika Stelmach with less than 10km remaining, she coasted home in 3:39:31.

She was only the second South African woman, after 2015 and 2016 champion Caroline Wostmann, to win the race since 2002.

Stelmach held on to grab the runner-up spot in 3:41:56 and Charne Bosman, who was set to defend her Comrades Marathon ‘down’ run crown in June, took third position in 3:45:20.

Russian athlete Alexandra Morozova, who competed under a cloud of controversy after apparently receiving clearance to participate, crossed the line in tears in sixth place, more than 12 minutes off the pace of the winner.

David Manja won the men’s half-marathon race in 1:04:07, holding off a strong foreign contingent in a hard-fought battle, with the top eight men all finishing within 60 seconds of the winner.

In-form athlete Nolene Conrad was nearly half a minute clear of Zimbabwe’s Betha Chikanga, securing a convincing victory in the women’s 21.1km race in 1:16:17.