Chad le Clos adds a second gold but it's Tatjana Schoenmaker who steals the show after she becomes the first local women's swimmer to win a medal at the showpiece in 8 years. 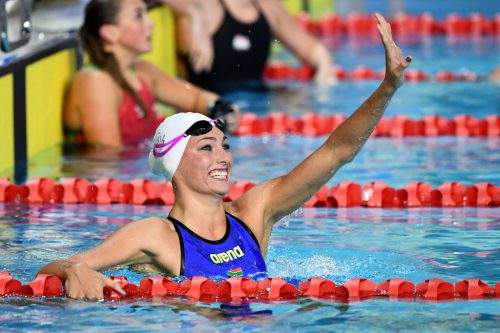 Chad le Clos and Tatjana Schoenmaker led the charge in the pool on Saturday, with Team SA bagging four more medals at the Gold Coast Commonwealth Games, lifting their tally to seven after three days of competition.

Le Clos went out hard and held his lead throughout the men’s 200m butterfly final, charging to a convincing victory in 1:54.00, more than two seconds ahead of his nearest opponent.

He added a second title to the gold medal he bagged in the 50m sprint the day before, and it was his third straight Commonwealth title in the four-length event.

“I’m very happy. I don’t want to sound arrogant but it was a good race for me,” Le Clos said.

“I wanted to get the ‘three-peat’ because nobody’s ever won three before at the Commonwealth Games.”

Schoenmaker, meanwhile, stormed off the block and took the early lead in the women’s 200m breaststroke final, and while she looked to be fading on the third length, she clawed her way back to win gold in an African record of 2:22.02.

She became the first SA woman in eight years to earn a swimming medal at the Games.

“Underwater I saw I touched close (in a tight race) and I was super happy,” Schoenmaker said.

“Then I turned around saw the time and though ‘ok, that’s a bonus’.”

Elsewhere in the pool, Cameron van der Burgh secured his first medal of the Games.

Though he was beaten by world record holder Adam Peaty and fellow Englishman James Wilby, Van der Burgh grabbed bronze in the 100m breaststroke in 59.44.

Earlier, in the morning session, weightlifter Mona Pretorius secured bronze in the women’s 63kg division, lifting a total of 206kg in the snatch and the clean and jerk.

Though they entered the race among the favourites, the SA mixed triathlon team settled for eighth place after Simone Ackermann battled through her leg of the contest with an injury.

The Proteas netball team earned their first win of the tournament, romping to a 49-35 victory in the group stages.

And on the hockey pitch, the national women’s team drew 1-1 against Malaysia, while the men’s side fell to Australia in a 4-0 defeat.