Netball Premier League: A quick guide to everything

South Africa's flourishing netball scene has benefitted greatly from the semi-pro tournament over the past few years. 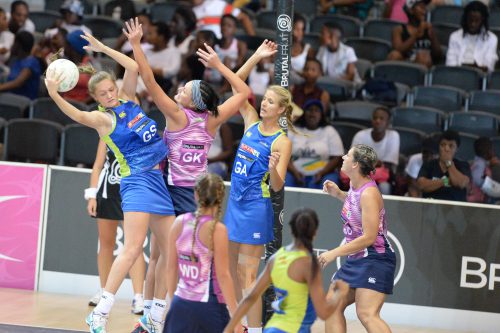 The Brutal Fruit Premier League is back. (Photo by Lefty Shivambu/Gallo Images)

The fifth edition of the Brutal Fruit Netball Premier League gets under way this weekend, with the Gauteng Jaguars gearing up to defend their title.

Here’s all you need to know ahead of the annual tournament.

The tournament starts this weekend with 10 matches being contested on Friday, Saturday and Sunday.

Over the opening fortnight, all games will be played at Ellis Park in Joburg, and the remaining fixtures in the six-week competition will be held at Rembrandt Hall in Pretoria.

A total of 56 games will be played throughout the league, with the final being held in the capital city on June 17.

Though the league was played over an eight-week period last year, it has been shortened by a couple of weeks this season, with organisers stating they had opted for a later start in order to accommodate international players who competed at last month’s Gold Coast Commonwealth Games.

While the 2017 tournament was played in Durban, Cape Town and Bloemfontein, the 2018 competition will be restricted to Gauteng.

Ten teams from around the country will compete for the top-flight crown.

Launched in 2014 as the first semi-professional netball league in Africa, the campaign offers rare prize money and incentives to players.

The Free State Crinums dominated the first three seasons with consecutive victories over the Gauteng Jaguars.

A persistent Jaguars side reached the final again last year, earning their maiden title with a 49-43 win over the North West Flames.

“I purposely made sure that every one of our training sessions has been geared towards becoming a better team. As a coach, I believe in focussing on one specific aspect of the game until the players have mastered it. The challenge is always to lift the intensity of our play. It was also important to get the right combinations sorted.” – Jaguars coach Jenny van Dyk.