The race legend though admits the gruelling circuit is starting to take it out of him. 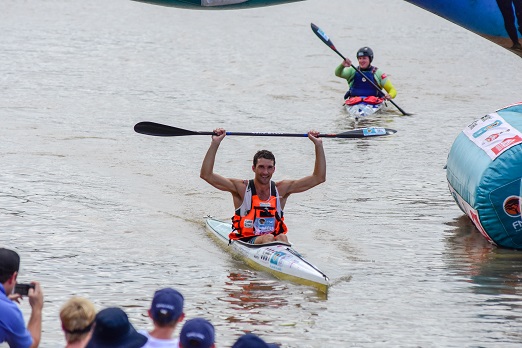 Andy Birkett winning the mens race during day 3 of the FNB Dusi Canoe Marathon from Pietermaritzburg to Durban on February 16, 2019 in Durban, South Africa. (Photo by Darren Stewart/Gallo Images)

Andy Birkett wrapped up his ninth career title at the country’s most prestigious river race, while Christie Mackenzie secured her maiden crown in the women’s contest at the Dusi Canoe Marathon in KwaZulu-Natal on Saturday.

Though he was chased hard by Sbonelo Khwela, who narrowed the gap to a little over a minute on the third and final day of racing, Birkett shook off a bout of illness to hold on for the win.

Veteran paddler Thulani Mbanjwa was the best of the rest, taking third place in 8:29:07.

“This year’s race dished out the hurt for me and last night I was man down at about one o’clock,” Birkett told the race website.

“This last day was really hard work for me. I just tried to keep the momentum going… and I won’t lie, I am happy to get to Durban and not be suffering on the river anymore.”

Mackenzie, meanwhile, edged out Tamika Haw by one second in a late sprint, crossing the line in 10:00:11.

“It was a pretty nerve wracking day for me, to be honest,” Mackenzie said.

“Before the stage I told myself that I needed to keep it conservative and avoid making mistakes because I had made so many in the first two days.”

Participating with an injured ankle after he had run, cycled and swum over 1 120km from Joburg to Durban for the Princess Charlene of Monaco Foundation, organisers said Parkin had swum across the finish line.