It's a time of transition for the team under new coach Robin van Ginkel. 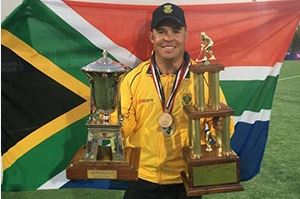 A 26-member national women’s hockey squad was unveiled on Monday, as they geared up for the final stage of their Olympic qualifying campaign.

While the SA team competed at four successive editions of the quadrennial Games between 2000 and 2012, they were left out in the cold ahead of the 2016 Rio Olympics after the SA Sports Confederation and Olympic Committee (Sascoc) tightened the qualifying criteria, which denied them a place at the showpiece as the African champions.

Again looking to secure their spot at next year’s Tokyo Games without relying on continental qualification, with Sascoc arguing that African competition was not strong enough, they needed to finish among the top two teams at the FIH Open Series Final in Valencia in June.

The SA squad, which included nine uncapped players, were set to face Italy, Wales and Thailand in Pool B of the tournament, with hosts Spain turning out in Pool A alongside Belarus, Canada and Namibia.

Training under new coach Robin van Ginkel, who had taken the post as a volunteer due to the SA Hockey Association’s financial struggles, the team for the Open Series tournament would be selected from the training squad.

“I am really excited to take my first team to Spain and look to do well in the FIH Hockey Series Final,” Van Ginkel said.

“The team selected has a good core of experienced players that will help blend the new names into the team and into international hockey.

“I am really looking forward to the start of our four-year process and the success we can bring to South African hockey.”