Proteas’ post-World Cup future should be in Bavuma’s hands

He might not be going to the World Cup, but the diminutive batter has proven he can't be confined to just a Test role anymore. 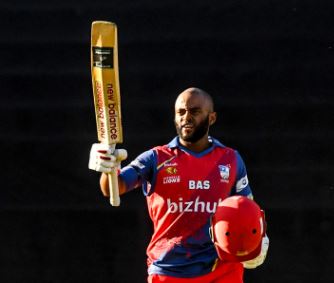 Yes, the diminutive 28-year-old strokemaker has been underestimated as a limited overs exponent for years now, but to say his superb innings was a revelation is inaccurate.

Bavuma made 113 on his ODI debut for the Proteas.

Even before his match-winning contribution on Sunday – which means the Highveld Lions claimed a domestic double in Enoch Nkwe’s first season as head coach – he averaged 28 (that’s indeed a high average in the format) and had a strike rate of 126 in all T20s.

The man is clearly a thoroughly rounded cricketer, capable of playing all formats.

Instead, Bavuma’s show-stopper of a knock suggests that, despite all the talk that men like Aiden Markram, Reeza Hendricks and Janneman Malan represent the Proteas’ batting future, he’s actually the key to South Africa’s post-World Cup progress.

About 18 months ago, the man from Langa stated his desire to play more white-ball cricket to fight for a World Cup spot, especially since he’s now a valued member of the Test squad.

As it turned out, that mission failed.

But it might prove to be one of the best things to happen to him.

After the showpiece in England, JP Duminy will move on and it’s widely expected that Hashim Amla and Faf du Plessis will too.

Du Plessis’ void is one Bavuma can fill with distinction.

The two are a similar type of player  – generally fluent, capable of being dogged and explosive when they need to be, even if it doesn’t quite come naturally.

Bavuma’s stats this season are revealing.

More importantly, the landscape would allow Bavuma the freedom to establish himself in the ODI squad without a host of competitors breathing down his neck.

One could even say his leadership this year could make him part of the captaincy debate, but let’s leave it at that.

The priority is to rather stop pigeonholing him at international level.