The Boston Marathon has been cancelled for the first time in the event's 124-year history because of ongoing coronavirus fears, officials confirmed on Thursday. 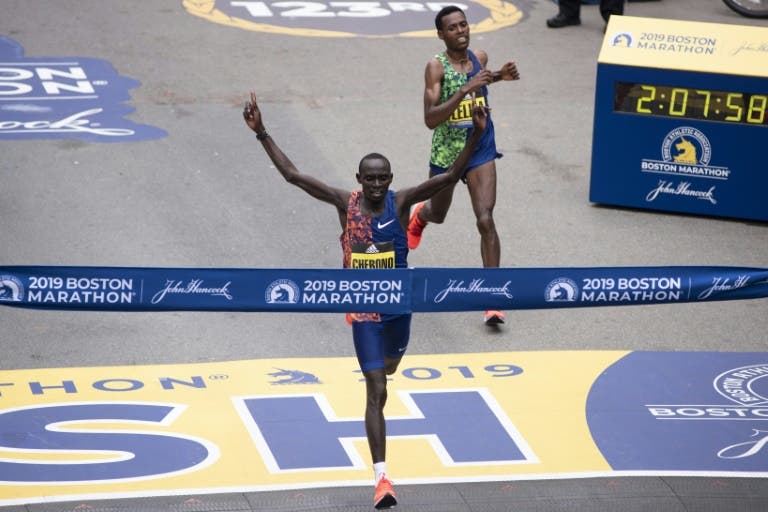 Kenyan Lawrence Cherono edgesEthopian Lelisa Desisa for the 2019 Boston Marathon title. The 2020 edition has been cancelled after originally being rescheduled for September because of COVID-19. AFP/File/RYAN MCBRIDE

Boston mayor Marty Walsh said that the race, which had already been postponed to September 14 from its April slot, would not now be held as planned for public health reasons.

“There’s no way to hold the usual race format without bringing large numbers of people into close proximity,” Walsh said in an announcement.

“While our goal and our hope was to make progress and contain the virus in recovering our economy, this kind of event would not be responsible or realistic on September 14 or anytime this year.”

The marathon has been held every year without fail since 1897, making it the longest-running major annual marathon in the world.

The other two major marathons scheduled in the US later this year — the October 11 Chicago Marathon and the November 1 New York Marathon — remain on the calendar.

The Boston Athletic Association said that entrants to the marathon could instead take part in a “virtual” Boston Marathon, anytime between September 7–14.

Entrants would need to complete the 26.2 mile distance within six hours and provide proof of timing, a statement said.

“Our top priority continues to be safeguarding the health of the community, as well as our staff, participants, volunteers, spectators, and supporters,” Boston Athletic Association chief Tom Grilk said in a statement.

“While we cannot bring the world to Boston in September, we plan to bring Boston to the world for an historic 124th Boston Marathon,” Grilk said of the virtual race.

Marathon racing around the world has faced severe disruption from the COVID-19 pandemic.

The London Marathon has been postponed until October while the Tokyo Marathon took place with only a reduced field of elite runners.

The September 27 Berlin Marathon, another of the world’s major marathon races, has also been cancelled.