Bulls boss Jake White said it was important to "chill" ahead of the Rainbow Cup final against Benetton. 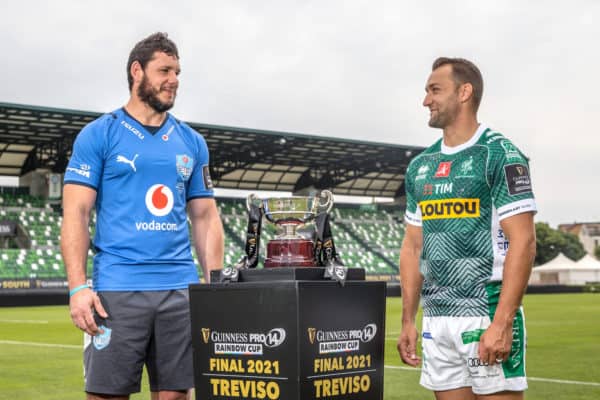 The captains of the two teams in the Rainbow Cup final - the Bulls' Marcell Coetzee and Dewaldt Duvenhage of Benetton. Picture: INPHO/James Crombie

A young Bulls side has this week gone from sleeping under their eiderdown duvets in midwinter on the Highveld to a summer cruise around some Mediterranean islands as they prepare for the unknown – a Rainbow Cup final against Benetton in Treviso on Saturday evening.

What they do know is that they are expected to win the final, which is why coach Jake White tried to ease the pressure on them this week by giving them a day off to explore the area around nearby Venice and the worthy history of Italy.

ROAD TO THE FINAL ???? Here’s how we got here ???? Once more unto the breach ????#TrueToTheBlue pic.twitter.com/TMnt8cTpiz

The Bulls have a proud record of winning all three Super Rugby finals they played in, and they have also won every decisive game in the time White has been at Loftus Versfeld. If that were not a lot to live up to, they also have the responsibility of being the trailblazers for South African franchises in Europe. They will want to show the new boys in Europe are going to bring a high quality of rugby.

“There’s massive pressure with all these must-win games and these are young guys, we forget how young they are sometimes,” White said on Friday. “Which is why we went on a boat cruise and just chilled at an island off Venice. There’s also a lot of excitement in the squad and hopefully we can translate that energy into a great performance.

“These are extraordinary times and hopefully all the hype in Treviso – meeting the mayor, the functions in the city square – leads to the final being a great catalyst, both for us starting to play our rugby in Europe, the British and Irish Lions coming to South Africa and the new United Rugby Championship.

“People want to see how good we are and it’s going to be good to measure ourselves.”

ALSO READ:  Pumas off to flying start with bonus point win against Lions

Like the wine-makers farming grapes 30km north-west of Treviso who anxiously watch the weather for climate-change induced hot spells that give their precious berries sunburn, Benetton coach Kieran Crowley has been watching the sky and knows what’s coming.

“We know what’s coming – a massive scrum, strong lineout and they love to maul. They’ll bring physicality, which we’ll look to nullify so we can concentrate on our own game. Hopefully we can combat it,” Crowley said.

Bulls must 'adapt' or die, says White, after Edinburgh defeat
1 day ago
1 day ago

Bulls must 'adapt' or die, says White, after Edinburgh defeat
1 day ago
1 day ago