The tourists will face the Sharks, the Bulls, South Africa A and the Stormers before facing the Springboks. 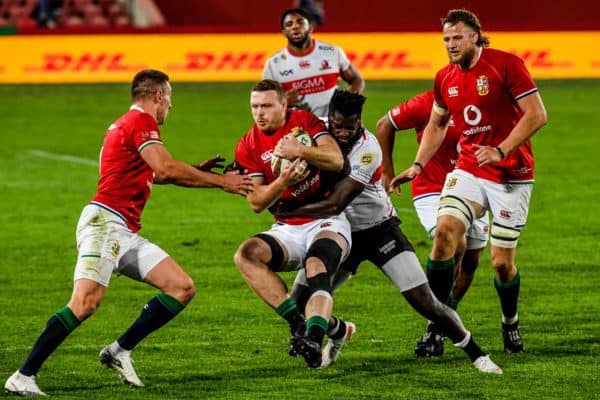 Sam Simmonds of the British and Irish Lions in action during their SA tour opener against Gauteng's Lions team. Picture: Gallo Images

British and Irish Lions coach Warren Gatland said on Saturday he hoped his team would face tougher opposition as they build towards a three-Test series against the world champion Springboks.

The Lions swept aside their namesakes, the Johannesburg-based Lions, scoring eight tries in an easy 56-14 win in the first match of their South African tour at Ellis Park.

Gatland said the tourists had to adjust their tactics because their opponents were not as robust as they had expected.

“We went in with a bit of a game plan,” said Gatland. “They probably did not pressure us as much on defence as we had expected.

“We were able to change the way we played so that was a pretty good reaction. I was just really pleased with the energy out there and the enthusiasm of the guys. It was a really positive start.”

But Gatland admitted in the virtual post-match press conference that he hoped they would be pushed harder in the four remaining games before the first Test in Cape Town on July 24.

The tourists will face the Sharks and Bulls — the strongest two South African franchises — next week, then South Africa A and another franchise side, the Stormers, before tackling the Springboks.

Gatland was assistant coach on the Lions’ tour of South Africa in 2009 when the Springboks won the Test series 2-1.

“In 2009 we did not come up against any of the Test players in the warm-up games and we were probably a little bit underdone,” he said.

“So we are going to have to work really hard in training to get the sort of physicality that is required.

“Some of the games are going to be a little harder, hopefully, but we understand that there are players out of the (franchise) sides because they are in the Springbok camp.”

ALSO READ: Bok wing Fassi on debut try: ‘I just had to back myself’

“This is a well-oiled, well-organised international team,” said Mallett, a pundit for the SuperSport channel.

“They are playing against youngsters in sides that have been shorn of our overseas players and the 45 guys who have been in the Springbok bubble.”

Gatland said the players who had not started against the Johannesburg-based Lions or Japan last weekend would run on in the next tour match, against the Sharks at Ellis Park on Wednesday.

He said he had not made any decisions about the likely composition of the Test team.

“I definitely do not want to pigeon hole anyone. Our thoughts at the moment (are) just to keep an open mind.”

Gatland said he had watched the Springboks beat Georgia 40-9 in Pretoria on Friday.

“South Africa have not played for such a long time,” he said. “They got some dominance and when they got ahead they looked to play some rugby.

“There is no doubt they showed what they are capable of doing in the line-outs and (there was) some strong individual running.

“They will definitely improve, being back together. Like us, they will be looking to improve week to week.”