Gatland wary of ‘showing hand’ ahead of Springbok Tests

Forwards Tom Curry, Josh Navidi and Adam Beard will make their first appearances for the Lions in a completely new run-on team. 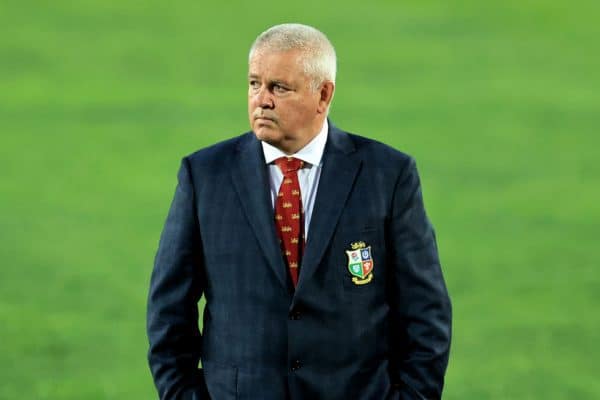 British and Irish Lions coach Warren Gatland said on Monday he did not plan to give the world champion Springboks an early indication of who they were likely to play against in the upcoming Test series in South Africa.

He said the announcement of the team that will play the Sharks at Ellis Park on Wednesday, the second of an eight-match tour, was not an indication of likely Test combinations.

He dismissed as coincidence that 13 of the eventual Test team played for the Lions against the Crusaders at a similar stage of the tour of New Zealand in 2017.

“Wednesday night is another chance for us to have a look at a few more combinations,” he told a virtual news conference.

“I’m looking forward to seeing how the back row goes — it is an exciting mixture and one that we hope will offer something a bit different.

“There is a lot of competition. If you look at all positions, particularly the back three, the competition is huge.

“As we get a bit closer (to the Test series) we will start looking at potential combinations (but) not putting out a team that we think will play in the first Test against South Africa.

“There will definitely be some mix-and-matching. You do not want to show your hand too early.”

ALSO READ: Sharks pack their bench as they prepare for Lions challenge

Exeter Chiefs hooker Luke Cowan-Dickie was selected to start against the Sharks despite having been knocked out in the English Premiership final against Harlequins on June 26.

Gatland said strict protocols had been followed and Cowan-Dickie had been cleared to play by a renowned concussion specialist.

Forwards Tom Curry, Josh Navidi and Adam Beard will make their first appearances for the Lions in a completely new run-on team.

The Lions thrashed the Golden Lions 56-14 at the same venue last Saturday and will be up against another young, inexperienced team with the Sharks missing nine players who are in the Springbok camp.

Asked whether he was worried about not facing strong enough opposition, Gatland said, “We are concentrating on ourselves. There are lots of things we have still got to work on.”

The Lions will be captained by Ireland lock Iain Henderson, with tour captain Conor Murray listed as a replacement.

After the Sharks, the Lions will play the Bulls in Pretoria and South Africa ‘A’ and the Stormers in Cape Town before the Test series begins on July 24.