Five players to watch at the Open Championship

Here are five players to keep a close eye on in the coming days at the 149th playing of the Open. 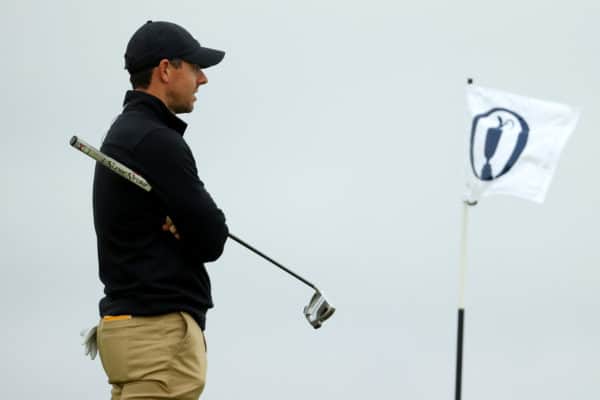 Rory McIlroy of Northern Ireland looks on from the green on the tenth hole during a practice round ahead of the 149th Open at Royal St George’s Golf Club on Wednesday. Picture: Andrew Redington/Getty Images

The 149th Open Championship stars on Thursday, a year later than planned due to the coronavirus pandemic, at the Royal St George’s course in Sandwich, Kent.

AFP Sport looks at five of the leading contenders to win the Claret Jug.

Rahm is the form player in the world having ended his wait for a major at the US Open last month.

The Spaniard has 11 top-10 finishes in his last 15 tournaments and was also on course to win the US PGA Memorial event in June when he was forced to withdraw due to a positive test for coronavirus.

A change to the links conditions did not disrupt his rhythm in finishing seventh at the Scottish Open last week, but 11th in 2019 was his best effort so far at the British Open.

Johnson deposed Rahm as world number one for this week, but has struggled to hit the heights he reached at the end of 2020 this year.

The American has just one top-10 finish since February and missed the cut in two of the last three majors.

However, his best showing at a British Open came at Royal St George’s a decade ago when he finished second to Darren Clarke.

“Beefy” Bryson has been the talk of the tour for some time for his physical transformation, bulking up to add distance to his driving off the tee.

The world number five has failed to make the cut in two of his three previous British Open appearances and finished 51st in 2018 when he did.

But DeChambeau has piled on the pounds in muscle since the last Open in 2019 and is hoping that pays off on his return to links golf with fair weather forecast.

“The times I’ve played in the British Opens in the past, I think they’ve been a little wet and windy. I usually struggle on that in general,” he said.

“This is the first time I’ve taken my length to links golf. We’ll see how that plays.”

Koepka is confident he will again be in the running come Sunday at a major championship.

The American has four major titles to his name, but his last came in 2019.

He was second to Phil Mickelson’s incredible triumph at the PGA Championship and tied for fourth at the US Open.

Koepka admitted Royal St George’s is far from his favourite course but said that will not impact on his ability to walk away with the Claret Jug.

“I don’t care whether I like the place,” he said. “I’ve won on golf courses that I’m not a big fan of before. It has nothing to do with it. Still got to get up and go hit the shot and do what I’m supposed to do, so that doesn’t bug me.”

Few would have imagined when McIlroy won back-to-back majors at the British Open and PGA Championship in 2014 that he would still be waiting for a fifth major title seven years on.

The Northern Irishman suffered a nightmare start on home soil at Portrush two years ago, when an opening quadruple bogey meant even a second round rally was not enough to make the cut.

He also failed to make the weekend at the Scottish Open, but is hoping the extra practice time in Sandwich will prove that was a blessing in disguise.

“To be down here and get a few holes in on Saturday, play a full round on Sunday, it felt like I got a bit of a head start on the rest of the field, which feels good,” said McIlroy.