Government gives sports fans the thumbs up to attend matches

Up to 2,000 fans will be allowed at outdoor venues, meaning fans can get ready to return to live sports events. 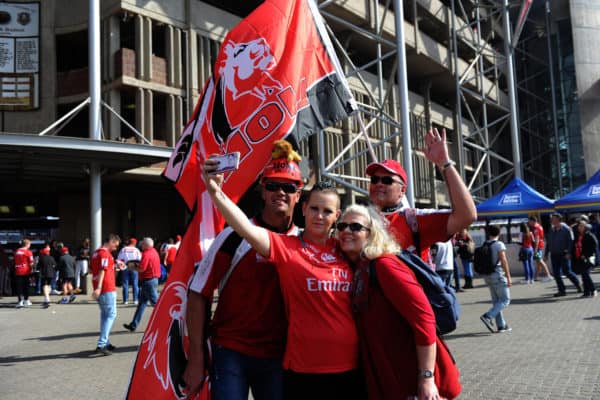 Rugby supporters, like these Lions fans, will soon be allowed back into the stadiums. Picture: Gallo Images/Getty Images

There was good news from the government on Monday for sports fans – supporters are now allowed back in the stands.

According to the latest entries in the government gazette, and adjusted lockdown regulations, published on Monday, up to 2,000 fans are now permitted inside outdoor venues and 750 for indoor arenas.

This is for professional as well as non-professional sporting activities, events and matches.

Spectators still have to adhere to all Covid protocols including being one and a half metres from one another. If this is not possible then no more than 50 percent of a venue’s capacity is allowed to be used.

Tuesday night’s World Cup qualifier between Bafana Bafana and Ethiopia at FNB Stadium will be the first event in South Africa since the first lockdown due to Covid early last year to have fans back, with 2,000 spectators allowed in.

Rugby fans will in the near future also be allowed back to watch the Bulls, Lions, Sharks and Stormers in action in the United Rugby Championship.

And in December cricket fans could get into the major grounds to see the Proteas in action again.