Charl Schwartzel fights to stay in the hunt for Masters title

Former Masters winner Schwartzel carded a one-over-par 73, and he is in a tie for fourth place ahead of the final round. 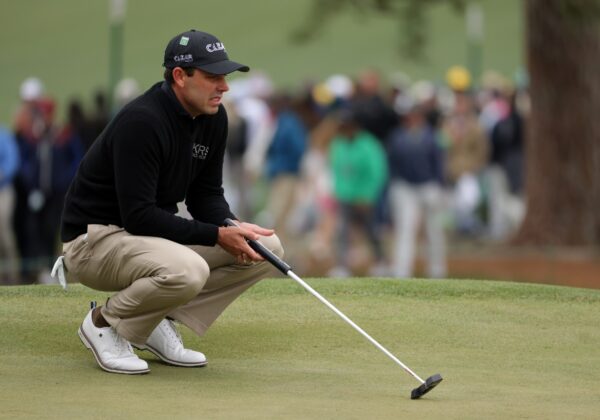 Charl Schwartzel lines up a putt during the third round of the Masters at Augusta National. Picture: Getty Images

Tiger Woods’s hopes of a victorious return from career-threatening injuries evaporated on Augusta National’s greens on Saturday, as Scottie Scheffler seized a three-stroke Masters lead, while South Africa’s Charl Schwartzel was still lurking just off the pace in the hunt for his second green jacket.

Woods, 14 months removed from a car crash that left him with injuries so severe he feared he might lose his right leg, saw his hopes of a stunning comeback for a sixth green jacket come undone with his worst-ever Masters round, a six-over par 78.

The fact that the 46-year-old was even able to tee it up — and make a 22nd consecutive Masters cut — was astonishing.

But at nine off Scheffler’s lead to start the day, Woods knew he needed something sensational to give himself a chance come Sunday, and instead he posted a round worse than the third-round 77 he shot in his 1996 debut as an amateur.

“It’s just like I hit a thousand putts out there on the greens today,” said Woods, whose prior mastery of the unforgiving, undulating greens of Augusta helped him to five Masters titles.

“I felt like I didn’t really hit it that bad, but I had four three-putts and a four-putt,” Woods said. “I just could not get a feel.”

Woods’s seven-over par total of 223 put him 16 strokes behind Scheffler, who survived drama at the 18th to card a one-under par 71 for a nine-under total of 207.

The 25-year-old Texan takes a three-shot lead over Australian Cameron Smith into the final round.

On a cold, windy day where scores soared, Smith carded the only round in the 60s with a four-under par 68 for 210.

Smith was two strokes in front of third-place South Korean Im Sung-jae, who shot a one-under 71.

Christiaan Bezuidenhout, the only other South African still in the field, was a further shots behind in a tie for 34th.

Scheffler was 10-under through 17 holes when his tee shot at 18 clipped a tree branch and ended up in dense undergrowth left of the fairway.

It took a concerted search to find his ball and after wading into the bushes to see the situation he took and unplayable lie, belted a shot up to the green and limited the damage to a bogey.

“We saw the guy who always finds the balls kind of panicking. I thought, ‘Oh crap,'” Scheffler said.

“Just getting it out of the bush and trying to make my five was key,” added Scheffler who said his heart rate “went up when they couldn’t find the ball but it went back down when they found it.”

It was a dramatic end to a round that featured half a dozen birdies and five bogeys, Scheffler maintaining his air of methodical calm throughout.

“You hate bogeying the last hole, but the way I bogeyed it, it for sure felt like a par,” Scheffler said. “Definitely a good finish to the day.”

Smith finished tied for second behind Dustin Johnson in 2020, when he became the only player to shoot four rounds in the 60s at the Masters.

The Aussie said playing within himself in the challenging conditions was the key to his round.

“I didn’t try to smash any drivers off the tee. I just tried to give myself opportunities,” said Smith, who added the toughest part of the day for him was “keeping my hands warm.”

“It was brutal. I think off the tee with this west wind there’s not many holes you get straight downwind or straight into the wind.

“You get lots of crosswinds and can get quite tricky into the greens and hitting different shapes and trying to judge the wind as well.”