Duanne Olivier and Wayne Parnell lead the way as Sri Lanka are bowled out twice in two days to gift South Africa a whitewash. 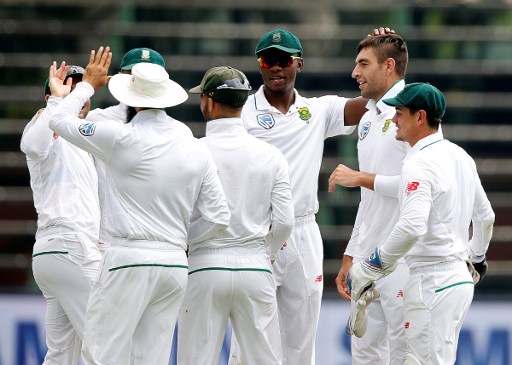 The Proteas can rightly celebrate their Test series whitewash of Sri Lanka.

That achievement is made even sweeter by the fact that they progressively won by bigger margins.

Saturday’s victory by an innings and 118 runs at the Wanderers easily trumps the wins at St George’s Park (206 runs) and Newlands (282 runs).

But there’s a bigger picture here … and it’s not a rosy one.

Sri Lanka have gone from reasonably competitive to simply abject in this series.

It’s fun for casual South African fans but it’s not good for the health of the game, especially the five-day format.

Each time a Sri Lankan batsman showed a faulty technique or poor judgement to lose his wicket, you could hear the calls for A- and B-section Test cricket grow.

Are the Islanders good enough to compete with South Africa?

It’s a question that will be asked but it’s actually not a good one.

Because before you trash Sri Lanka, remember that they beat Australia 3-0 on the Island.

Pakistan were the No 1 ranked Test side before going to Australia and being whitewashed.

The point here is that the majority of Test sides focus on winning at home and struggle abroad.

That’s why the Proteas series win in Australia late last year was such a fine achievement.

Take nothing away from the Protea bowlers, they were ruthless.

Resuming on 80/4 in their first innings, Sri Lanka fell foul to the new members of the bowling attack – Duanne Olivier and Wayne Parnell.

After Kagiso Rabada (3/44) and Vernon Philander (3/28) added to their overnight tallies, the support staff took over.

Olivier (2/19) bowled an excellent length before Parnell cleaned up the last two batters.

Armed with a lead of 295, Faf du Plessis decided to enforce the follow-on and pleasingly, the inexperienced duo led the way.

Both were far more aggressive and shorter in their lengths but it paid off against a hapless batting line-up.

Parnell finished with a career-best 4/51, while Olivier nabbed 3/37.

The left-handed opener Dimuth Karunaratne was the only visitor to provide any resistance, stroking an even 50.

But his knock was ended by the best delivery of the day – a searing in-ducker from Kagiso Rabada (2/50).