This Proteas attack needs nothing more than Keshav Maharaj

Local cricket isn't all that good in appreciating "boring" spinners but hopefully the national team have realised show valuable they can be. 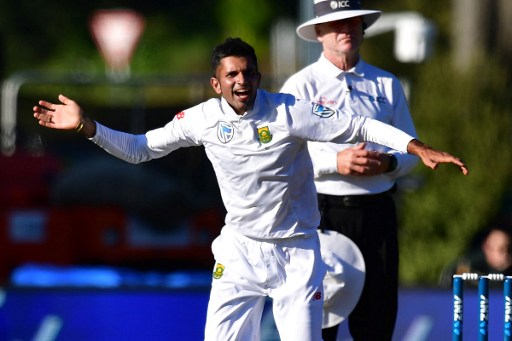 Keshav Maharaj is never going to be a cricketing celebrity but the Prtoteas don't need him to be one. Photo: Marty Melville/AFP.

Keshav Maharaj on Friday should finally have settled a debate that many people in South African cricket don’t readily want to accept.

The Proteas don’t need a flashy Test spinner with a big personality.

They don’t need to futilely try to find a Shane Warne or hope Imran Tahir can still make it in the five-day format.

All they need to do is appreciate left-arm spinners who do their job without fuss.

South African cricket didn’t really afford Paul Harris that treatment, so they have the chance to do so with Maharaj.

During the third day’s play of the first Test against Dunedin, the 27-year-old Dolphins stalwart snapped up his maiden five-wicket haul in Test cricket.

His the first South African spinner to do that in New Zealand for 53 years.

And the beauty of Maharaj’s spell of 5/94, which restricted the home side’s lead to 33, was that it wasn’t magical at all.

It was thoughtful, effective and adaptive on a pitch that doesn’t support the spinners.

To illustrate how versatile Maharaj is, one only needed to look at his improvement from the second to third days.

“I wasn’t happy with the way I bowled initially,” he said.

“I spoke to (Proteas spin bowling coach) Claude Henderson and we addressed a small technical thing. I also decided to change my mindset.”

In fact, he merely went to his default setting: keeping it tight.

“I just kept things simple when we started play (on Friday),” said Maharaj.

“And it paid dividends. It’s extremely tough to bowl on this pitch. There’s  no pace on the ball.

“I have a slower trajectory through the air‚ and that makes it a bit more difficult. When the new ball came along‚ it just skidded. It wasn’t really turning much.”

It all sounds like the talk of a man who didn’t taste much success and yet there was Maharaj, boasting five victims.

One has to ask then: what does this Proteas side need from its spinner when its biggest strength remains its pace attack?

The answer is simple.