Faf du Plessis has been very impressed by the young Proteas opener's attitude and would give him another chance in Sunday's final ODI against Sri Lanka. 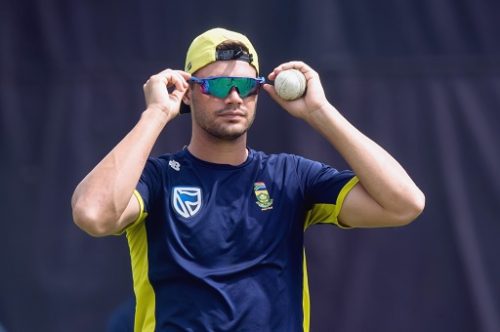 If Faf du Plessis initial selection plan is kept to, Aiden Markram should have a chance at redemption in Sunday’s final ODI against Sri Lanka in Colombo.

The embattled young opener has looked all at sea on the tour, scoring a pitiful 43 runs in six international innings across the two formats and eventually being dropped from the third ODI onwards.

In his absence, Reeza Hendricks seized his chance in stroking a brilliant 102 on debut in Kandy.

But Du Plessis believes South Africa will stick to the plan of including him again after a short break.

“We’ve just given him a break of two games and then hopefully see if we can include him for the last game,” he said.

Despite clearly looking like a man not trusting his own game, the 23-year-old is in a “good space” according to his injured skipper.

“For a young guy going through a tough time I can see he’s got a very mature head on his shoulders,” said Du Plessis.

“Aiden understands that (slumps are) part of cricket, going through the up and downs, that good times can be followed by bad ones. The conversations we’ve had have been that you don’t become a bad player overnight. He’s really excited about having to try and figure out what he needs to do to become an even better player.”

Would it have been better to try and stick it out with Markram?

“Aiden was disappointed not to try and keep on fighting but I told him I’ve been there too. It sometimes feels that when you’re training harder and facing extra balls that you’re just taking the shovel and digging the hole deeper. But he’s really in a good space.”