The Proteas' stand-in skipper wants to break his captaincy win duck, but also enjoy the experience more this time. 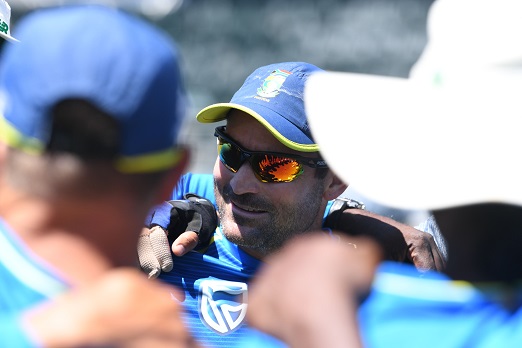 Dean Elgar has a simple objective in his second Test as the Proteas’ stand-in skipper.

“Don’t lose,” the sharp-tongued opener said on Thursday ahead of Friday’s third and final Test against Pakistan at the Wanderers.

ALSO READ: Elgar very much aware of the ‘Faf’ trap

Should South Africa fail in their mission for a 3-0 clean sweep in the series, Elgar’s captaincy win record will remain at 0% following 2017’s massive 211-run loss to England at Lord’s – his only other outing as leader.

In both instances he’s had to deputise for Faf du Plessis, who was on paternity leave 18 months ago but is now suspended due to another over rate offence.

“That Test against England was quite chaotic,” Elgar reminisced.

“I remember getting dressed and being pretty useless during our warm-up game of football. I had to run back again and dress for the toss. It was the start of a series against a tough England team. With due respect, this series has at least already been won.”

Even though winning remains the left-hander and his troops’ No 1 priority, Elgar also wants to be more chilled this time round.

“When I look back at the Lord’s experience now,  I realise I had a lot more time to try and enjoy it,” he said.

“Here I’m just going to take things in a bit more. I don’t think I’m going to do this anytime soon again (captaining).”

Despite his temporary role, the 31-year-old didn’t waste time stamping his authority on things and is adamant the Proteas must be ruthless regardless of their early series victory.

“I mentioned that even though we’ve won the series, we’ve been in a (clean sweep) position before and let it slip,” said Elgar.

“It hurt last year to lose to India here. My message was blunt and straightforward: we can’t be complacent and if there’s instances of that, we need to eliminate it immediately. We want to win 3-0.