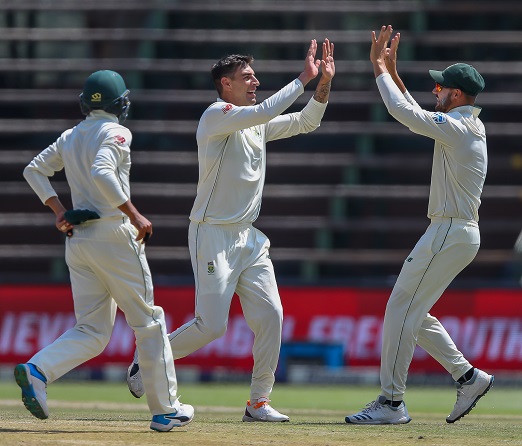 Aiden Markram of South Africa congratulates Duanne Olivier of South Africa after his second wicket of the day during day 4 of the 3rd Castle Lager Test match between South Africa and Pakistan at Bidvest Wanderers Stadium on January 14, 2018 in Johannesburg, South Africa. (Photo by Gordon Arons/Gallo Images)

The red-hot Duanne Olivier appropriately drove the Proteas’ charge towards a 3-0 Test series whitewash against Pakistan on Monday.

Continuing to bowl at fierce pace, the 26-year-old quick took the two wickets that broke the visitors’ resistance after it seemed they might make a game of chasing 381.

Oliver opened the door in the third over of the day when he had the dangerous Babar Azam (21) hopping with the vicious bouncer that the dynamic stroke-maker could only fend behind to Quinton de Kock.

And then, just to illustrate what scars he has left on the Pakistani batting, the man from Groblersdal snapped up the vital wicket of Sarfraz Ahmed the very next delivery.

It was a cracking piece of bowling, built very much on deception.

Sarfraz was clearly hanging on the back foot for a short ball, but Olivier surprised him with a fuller length at high pace that caught the batter totally off guard.

His figures of 3/74 meant he finished with an immense 24 victims, the second most in a three-match series by a South African.

The record is held by Charlie Llewellyn, a spinner who claimed 25 wickets in 1902 against Australia.

From there on, it was just a matter of how quickly the Proteas could wrap things up.

Vernon Philander’s bag of tricks accounted for the innings mainstay, Asad Shafiq for an attacking 65, before Kagiso Rabada finished the series strongly.

He claimed three of the last four wickets to end with 3/75.

Depressingly, after some fine resistance from Faheem Ashraf (47 not out), the final wicket was a farcical run out.